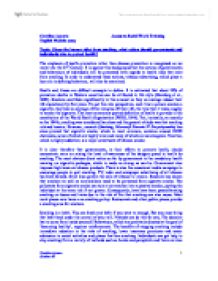 Given the known risks from smoking, what action should governments and individuals take to protect health?

Caroline Ayanru Access to Social Work Training English Module essay Topic: Given the known risks from smoking, what action should governments and individuals take to protect health? The emphasis of health promotion rather than disease prevention is recognised as we move into the 21st Century. It is against this background that the actions of governments and behaviours of individuals will be presented with regards to health risks that exist from smoking. In order to understand these actions, tobacco advertising, which plays a key role in defining behaviour, will also be examined. Health and illness are difficult concepts to define. It is estimated that about 50% of premature deaths in Western countries can be attributed to life style (Hamburg et al., 1982). Smokers contribute significantly to this amount as they on average reduce their life expectancy by five years. To put this into perspective, each time a person smokes a cigarette, they take an average of five minutes off their life; the time that it takes roughly to smoke the cigarette. The most commonly quoted definition of health is provide in the constitution of the World Health Organisation (WHO, 1946). ...read more.

The pollutants from cigarette smoke can turn a non-smoker into a passive smoker, putting the individual at the same risk if not greater. Consequently, laws have been passed banning smoking on buses and trains due to the risk of fire that smoking can also cause. Most work places now have a no-smoking policy. Restaurants and other public places provide a smoking area for smokers. Smoking is a habit. You can break any habit if you want to enough. But you must bring that habit back under the control of your will. Nobody can do this for you. The decision has to come from inside yourself. Behaviours, which are positively directed at the goal of 'becoming healthy', requires reinforcement. The benefits of stopping smoking include immediate reduction in the risks of smoking, lower insurance premiums and easier admission to social activities and places that ban smoking. Individuals can get help to stop smoking from a variety of methods such as books and pamphlets and there are also support groups that can help an individual to stop smoking. ...read more.

Government concerns are about the social and economic impact of preventable illnesses attributable to smoking and play a major role in regulating smoking. There are huge annual costs of treating diseases associated with smoking including cancer of the larynx, oral cavity, esophagus, bladder, kidney and pancreas. Smoking is also known to increase the risk of dying from chronic bronchitis and emphysema. In America recently, a large tobacco group agreed to pay damages to five state. Of course what should be of most concern is that these disease can devastate lives. The tobacco industry has received criticism for its role in encouraging smoking, particularly in young people. The research organisations should continue to provide evidence that will aid in this regard. It is very difficult to stop smoking, mostly because smokers crave the effect of the nicotine in the smoke, known for its ability to induce dependence. Stopping smoking also causes various reactions like overeating. Ultimately the decision to stop smoking rests with the individual and there should always be resources and support available. In conclusion, all the above factors need to be carefully balanced and the evidence is that governments and individuals need to always do more to protect health from the risks of smoking. ...read more.