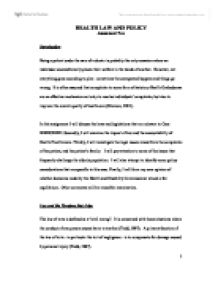 HEALTH LAW AND POLICY Assessment Two Introduction Being a patient under the care of a doctor is probably the only occasion where an individual unconditionally places their welfare in the hands of another. However, not everything goes according to plan - sometimes the unexpected happens and things go wrong. It is often assumed that complaints to some form of statutory Health Ombudsman are an effective mechanism not only to resolve individuals' complaints, but also to improve the overall quality of health care (Paterson, 2001). In this assignment I will discuss the laws and legislations that are relevant to Case 00HDC00835. Secondly, I will examine the impact of law and the accountability of Health Practitioners. Thirdly, I will investigate the legal issues raised from the complaints of the patient, and the patient's family. I will pay attention to some of the issues that frequently challenge the elderly population. I will also attempt to identify some policy considerations that are specific to this case. Finally, I will form my own opinion of whether decisions made by the Health and Disability Commissioner struck a fair equilibrium. Other comments will be raised for examination. Law and the Tensions that Arise The law of torts is defined as a "civil wrong". It is concerned with those situations where the conduct of one person causes harm to another (Todd, 1997). A primary function of the law of torts - in particular the tort of negligence - is to compensate for damage caused by personal injury (Todd, 1997). Health Practitioners in New Zealand are largely protected from the "no fault" Accident Compensation Scheme (ACC), which reduces practitioners chances of being sued in court. ...read more.

Research shows that one of the most important factors in healing is the blood supply to the tissues. In some patients, it is recommended to try a limited amputation if there is a chance of healing, but to be prepared to proceed to a major amputation if healing doesn't take place. This in my view is what Dr C did. Unfortunately, there is no test that can predict in every patient whether healing will take place, and it is a matter of surgical judgment and experience whether a wound will heal or not (NZ Society Vascular Surgery, 2004). Under the circumstances, Dr C overruled the considered opinion of Mrs A, probably because he felt that she was not 'lucid enough' to make the right decision at the time. Instead Dr C took the utilitarian approach or acted on paternalism for the best interest of his patient (i.e. on the assumption that doctor knows best). Utilitarianism is primarily concerned with the "greatest good for the greatest number" and because of this, reflects the wants and desires of society (Gillon, 1992). Utilitarianism can face many criticism, e.g. if the majority of people always have their way then the minority will always be left out and will not be given a fair chance (Corey, 1993). Dr C's approach went against her, therefore she lost her autonomy. The communication level between Dr G (registrar) and Dr C could be improved, e.g. even though it was Dr C's responsibility for performing the surgery, he could have involved Dr G (who probably assisted with the operation) ...read more.

be considered, whereby a family member should have been a support backup in case the patient was not fully alert under the circumstances. Did the Commissioner strike a fair balance? In this case, the Commissioner should have looked beyond Rights 6 and 7. There were obvious communication fractures which the Commissioner ignored. Right 5 - Dr C should have ascertained whether Mrs A was in a position to communicate with him, and, if so, advised Mrs A of what options were available. If Mrs A's condition prevented her from communicating, then her family should have been communicated with, as they would have carried out her wishes. Even after the surgery, Dr C did not facilitate effective communication as to why he performed BKA, therefore in my opinion Mrs A's right to effective communication was breached. Right 4 -Services of an appropriate standard could have been breached by the surgeon and overlooked by the Commissioner. Mrs A's family felt that Dr C did not provide her with reasonable care and skill. The doctor failed to provide services (e.g. therapist, counselor) in order to assist Mrs A mentally, for surgery. I also believe the Commissioner should source other legislations or Acts apart from the CHDCSR. Conclusion There are many categories of law which may impact upon doctors but, as a general rule, the principles applied by the courts to date in civil proceedings have come principally from the law of negligence and contract (Skene, 1998). Too often we hear 'doctor knows best'. I think reasonable care challenges this view, because it argues for patient involvement in medical decision-making, and it critically examines approaches based on the assertion of patients' legal rights. ...read more.