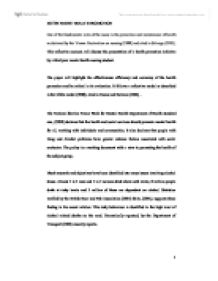 One of the fundamental roles of the nurse is the promotion and maintenance of health as declared by the Vienna Declaration on nursing (1988) and cited in Salvage (1993). This reflective account, will discuss the presentation of a health promotion initiative by a third year mental health nursing student. The paper will highlight the effectiveness efficiency and economy of the health promotion and be critical in its evaluation. It follows a reflective model as described in the Gibbs model (1988), cited in Burns and Bulman (2000), . The National Service Frame Work for Mental Health Department of Health standard one, (1999) declares that the health and social services should promote mental health for all, working with individuals and communities. It also declares that people with Drug and Alcohol problems have greater adverse factors associated with social exclusion. The policy is a working document with a view to promoting the health of the subject group. Much research and objectives have been identified into many issues involving alcohol abuse. Almost 1 in 3 men and 1 in 5 women drink above safe levels, 8 million people drink at risky levels and 3 million of those are dependant on alcohol. Statistics verified by the British Beer and Pub Association (2004) ...read more.

This initiative could be used for clients on different stages of the cycle but would require additional and more specific reasons to adopt a change in behaviour at its onset. Clients participating in the group at an earlier stage would need a clear understanding of the process of change. I believe that I chose the best approach by using this method, but would have benefited by not being so structured. The group had a wealth of experience and working knowledge of their previous drinking behaviour, and time should have been given for them to share their experience with the group. This would have contributed to the delivery of the message as being personal to them, and increased its effectiveness. I was conscience that the group were engaging and discussing my points as a team, but at times stopped them, possibly due to the fact that I was being assessed and felt that I needed to show control of the group. I have learnt from this that it is vital occasionally to allow the group to dictate the speed and content if it is aiding the message. It is of course important to have a control of a group but in the inpatient setting such as opportunities of good group interaction should be embraced. ...read more.

Action Plan The action plan was effective in that it gave a good time schedule to work to. I tried to stick to the timings as far as possible but was unable to due the demands on the practise placement. The presentation was put back a week due to the fact that an incident had occurred during before my presentation. I was disappointed as I had prepared well and was conditioned for the experience of discussing my presentation with the group, however when I did present it was to an additional twenty five people, So my subject group was infact better. It was more economic to give the presentation to more people and the message could be dissipated to a bigger group of clients. The health promotion was a success. The presentation will be used as an addition to the units program and will provide an additional resource, with clients suffering from alcohol problems I have learnt a tremendous amount about delivering a presentation during this initiative, and am enthused that the ready rekoner may be used for a national campaign. The biggest lesson learnt is that health promotion should be one of the primary interventions of a nurse. We need to convey knowledge and understanding to our clients in order to empower them to make considerable changes in their previous behaviour of health neglect. Word Count 1920 December 2005. X01106 University Of Chester. ...read more.