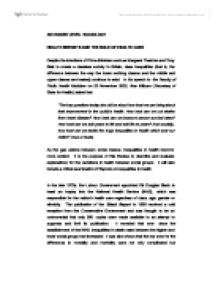 HEALTH REPORTS AND THE ROLE OF HEALTH CARE

ADVANCED LEVEL SOCIOLOGY HEALTH REPORTS AND THE ROLE OF HEALTH CARE Despite the intentions of Prime Ministers such as Margaret Thatcher and Tony Blair to create a classless society in Britain, class inequalities (that is, the difference between the way the lower working classes and the middle and upper classes are treated) continue to exist. In his speech to the Faculty of Public Health Medicine on 20 November 2002, Alan Milburn (Secretary of State for Health) stated that: "The key questions today should be about how best we can bring about that improvement in the public's health. How best can we cut deaths from heart disease? How best can we improve cancer survival rates? How best can we add years to life and add life to years? And crucially, how best can we tackle the huge inequalities in health which scar our nation? (Dept of Health) As the gap widens between social classes, inequalities in health become more evident. It is the purpose of this Review to describe and evaluate explanations for the variations in health between social groups. It will also include a critical examination of Reports on inequalities in health. ...read more.

Of the four explanations for inequalities in health, the Black Report chose this theory, which resulted in the Government's disapproval. It argues that people receiving low income are unable to afford adequate diets. The direct effect of material circumstances on health consists of factors such as unhealthy working conditions (e.g. exposure to hazardous materials such as asbestos), poor quality housing (e.g. dampness, which could lead to asthma and other chest complaints) and the lack of other important resources. (Jorgensen 1997) The most fundamental indirect effect of a person's material and social circumstances is related to income. The Health Care Service is seen to favour the middle-class who knows how the system works and are more equipped (e.g. education/influence) than the working-class to take advantage of the services provided. They are also able to receive better access by way of paying for private treatment. The Black Report sums up the problem by stating that '...while genetic and cultural or behavioural explanations played their part, the predominant or governing explanation for inequalities in health lay in material deprivation'. (Sociology Review 1999) It is without question that in order for any major improvements to be made, there needs to be a radical change (through Governmental policy) ...read more.

(Our Healthier Nation 1998) In 1997, Sir Donald Acheson was commissioned by the Government to carry out an 'independent inquiry into inequalities in health'. Acheson stated that 'the key objective of our report is to contribute to the development of the Government's strategy for health and an agenda for action on inequalities in the longer term [and to] 'take into account the main features of "Our Healthier Nation"' (Acheson 1998) At the end of the Report, Acheson's committee recognised a variety of areas for future policy development in relation to health inequalities which included education, poverty and nutrition. They also saw ways in which to reduce inequalities within the National Health Service. This Review has detailed the wide and growing inequalities in health in Britain and has reviewed a number of Reports that have looked into ways of addressing these inequalities. It seems only fitting to conclude with a quotation from Article 25(1) of the 1948-1998 Universal Declaration of Human Rights which states that: 'Everyone has the right to a standard of living adequate for the health and well-being of himself and of his family, including food, clothing, housing and medical care and necessary social services, and the right to security in the event of unemployment, sickness, disability, widowhood, old age or other lack of livelihood in circumstances beyond his control. ...read more.