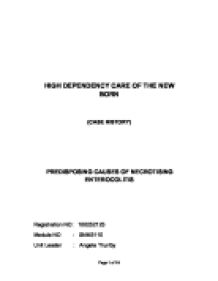 HIGH DEPENDENCY CARE OF THE NEW BORN. The following discussion will analyse the care of a baby who I have recently looked after in the high dependency who developed necrotising entero colitis(NEC) and consequently had to be re admitted to the NICU.

HIGH DEPENDENCY CARE OF THE NEW BORN (CASE HISTORY) PREDISPOSING CAUSES OF NECROTISING ENTEROCOLITIS Registration NO: 100252125 Module NO : SNM3115 Unit Leader : Angela Thurlby Word Count : 2022 The following discussion will analyse the care of a baby who I have recently looked after in the high dependency who developed necrotising entero colitis(NEC) and consequently had to be re admitted to the NICU. According to Sankaran (2004) NEC is an inflammatory disease of the bowel, predominantly affecting premature infants but it sometimes occurs in 'cohorts'. Whilst caring for the baby he became ill with a profound bradycardia and on turning him over he looked pale, cyanosed with a mottled skin and distended abdomen. He weighed only 1050g, and had previously been moved from ITU to high dependency because he was tolerating full feeds of expressed breast milk (EBM). According to Boxwell (2010) NEC is characterised by transmural intestinal inflammation, ischaemia, necrosis and sometimes perforation which affects one to eight per cent of infants admitted to NICU. As a result of his condition the baby was transferred back to intensive care unit for close observation and further investigation. He had been born at 24 weeks +5 days gestation with a birth weight of 590g but was now 42 days old. ...read more.

Furthermore, McComark (2000) states that ''exchange transfusions can be implicated because it can cause fluctuating mesenteric blood flow''. The baby in this case had a blood transfusion. Boyd (2000) points out that NEC and bowel perforation are common if the UAC is positioned at T7 and T8 due to occlusion of the superior mesenteric orifice. Visceral blood flow may be disturbed and cause bowel injury if high UACs are left in situ for more than one week. "Part of the management of NEC should include removal of UAC if in situ" (McCormick 2000). The baby in this case had a UAC in situ at some point and also had a small PDA. Boxwell (2010) states that blood flow to the gut are compromised by left to right shunting through a PDA. According to Kliegman and Walsh (1992) even if no single organism is consistently associated with NEC, the blood cultures may be positive in more than a quarter of cases. Crawford and Hickson (2002) state that the gas producing bacteria which normally reside in the intestine enters through the damaged intestinal mucosa, and the formula milk if started acts as a food source for the bacteria enhancing the bacterial proliferation. Kleigman et al (1992) states that isolated bacteria are often members of the normal gut flora. ...read more.

The baby in this case was treated conservatively with antibiotics and resumed his feeding slowly with EBM and eventually recovered without surgery and was eventually transferred back to the special care baby unit. He slowly gained weight and managed on demand breast feeding. The parents were very happy about his progress and their trust and confidence was restored as they were prepared to take him home. Sometimes parents feel overwhelmed when speaking to a doctor but generally feel more comfortable to talk about their baby with a nurse. It is also a part of the neonatal nurses' role to recognise the parents requiring emotional, financial or psychological support. From this experience of nursing a baby with NEC I have learnt about the importance of close observation of the babies, in order to recognise the signs and symptoms early. The benefits of breast milk in treatment and the responsibility of nursing staff to ensure that parents are aware of these benefits were also highlighted to me. I feel confident caring in such cases, and have better understanding of NEC, its signs and symptoms, predisposing factors, preventive measures and treatment. I hope that this will enable me to improve my practice and be able to share information with the parents and with new staff who have less experience in nursing infants. ...read more.