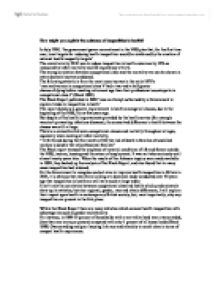 How might you explain the existence of inequalities in health? In July 2000, 'the government gave a commitment in the NHS

How might you explain the existence of inequalities in health? In July 2000, 'the government gave a commitment in the NHS plan that, for the first time ever, local targets for reducing health inequalities would be reinforced by the creation of national health inequality targets' The overall aim by 2010 was to reduce inequalities in health outcomes by 10% as measured by infant mortality and life expectancy at birth. The strong correlation between occupational class and the mortality rate can be shown in every decinnial survey conducted. The following statistic is from the most recent survey in the early 1970's 'men and women in occupational class V had a two-and-a half greater chance of dying before reaching retirement age than their professional counterparts in occupational class I' (Black 1980) The Black Report published in 1980 'was an attempt authorised by a Government to explain trends in inequalities in heath' The report did show a general improvement in health amongst all classes, due to the beginning of the NHS, thirty-five years ago. But despite of the health improvements provided by the health service (for example vaccine's preventing infectious diseases), the unresolved difference in health between the classes was still at large. There is a connection between occupational classes and mortality throughout all ages, especially when looking at infant mortality, " At birth and during the first month of life the risk of death in families of unskilled workers is double that of professional families" The Black report stressed the emphasis of material conditions of life and factors outside the NHS, income, housing and the nature of employment. ...read more.

The contrast between the occupational classes regarding health is due to statistical inaccuracies. For example 'The scale is based on a man or single women's occupation and so a married women, is classified according to her husbands occupation, meaning the term has an inherent gender inaccuracy' (Whitehead 1992). The information regarding occupations is usually obtained from death certificates which can be vague and do not record every occupation an individual has had during their life-time, many occupations that are not recorded could have had an direct effect on health previously in life. Surveys which are used to record statistics also have many major flaws, one of these being the fact that a percentage of the public do not wish to divulge personal information regarding occupation, illness and deaths within their families. This is also the case when recording number of patients at general practices, many people take care of themselves or simply ignore symptoms of illness. A second theoretical approach to explaining health inequalities is that of natural or social selection. It suggests that health inequalities 'result form a continuous process of social mobility, with those moving up being healthier than those moving down the social scale' (Power/Manor/Fox Health and Class1991) People with poor health seem to become concentrated in the lower socio-economic groups. A study of infant mortality according to class of father and class of husband gave strong evidence to social selection, Illsley (1955) claimed that women who marry up the occupational classes were taller than those who marry downwards. ...read more.

The social nature of the accident's give a good example of the consequences of living in a poor area without adequately monitored play areas for children. This can also be said for safe home furnishings and domestic appliances. The possibility of children having an accident from lower class families is also increased, there is less time for parents to monitor their children because for the majority of the time that parents have to go to work and the cost of additional childcare is not an option. 'Class patterns of accidents has to be seen in the light of the great differences in the material resources of parents, which may place significant constraints on the routine level of care and protection that they are able to provide for their children' (Townsend/Davidson 1988) Families living in poverty find themselves trapped in a circle, they are twice as likely to have a baby which has lung, heart or reparatory problems due to low birth weight (pre-mature babies) problems are then passed onto the next generation. The reason there is so many pre-mature babies is linked with parental poverty and a poor environment rather than the quality of medical care that a person receives. (From figures from the Black Report) In conclusion, it is obvious that there is not one factor which can explain the inequalities in health in Britain, however Government policy and funding of the NHS, housing and employment opportunities show that this is an issue that is being addressed. Because expected life span is increasing as awareness into the importance of a healthy life style then there is still hope that the gaps between health and class, gender and ethnicity will decrease. ...read more.