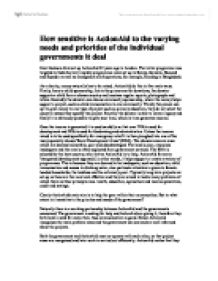 How sensitive is ActionAid to the varying needs and priorities of the individual governments it deal Cecil Jackson-Cole set up ActionAid 22 years ago in London. The initial programme was targeted in India but very rapidly programmes were set up in Kenya, Somalia, Burundi and Ecuador as well as emergency relief operations, for example, flooding in Bangladesh. As a charity, money naturally has to be raised. ActionAid do this in five main ways. Firstly, there is child sponsorship, this is the prime area for donations, the donator supports a child from a chosen country and receives regular reports, photographs and letters. Secondly the donator can choose community sponsorship, where the money helps support a project, such as child immunisation in one community. Thirdly the person can opt to give money to one type of project such as primary education, they do not select the country instead they specify the project. Fourthly the donator is able to leave a legacy and finally it is obviously possible to give your time, which in time generates income. Once the income is generated it is used carefully so that over 70% is used for development and 30% is used for fundraising and administration. Unless the income raised is to be used specifically for emergency relief it is then ploughed into one of the many specially chosen 'Rural Development Areas' (RDA). The chosen areas are ones which are deemed vulnerable, poor and disadvantaged. The land is poor, resources inadequate and the area is often neglected from government services. The RDA is selected by the host country, who invites ActionAid in to help. ...read more.

Here the worker enhances their knowledge and understanding of the indigenous people by working with them thus seeing the problems that face them. These five approaches help and encourage those from the developed world to learn from those of the developing. Thus with their new knowledge they can use their skills and influences to devise programmes to help the needy areas. But above all it is a mutual learning experience for both involved- by the interaction between the two groups, both draw knowledge and learn from one another. Alongside this information received by the field researchers, more specific data is received about the RDA in particular and then used within the Participatory Rural Appraisal (PRA). This is the principle methodological approach used by ActionAid and it is based on Robert Chambers' Rapid Rural Appraisal. The PRA collects data such as village maps; transects showing how water, crops and landuse varies across the village; seasonal calendars showing how activities vary across the seasons and trend lines. It then looks at productivity, sustainabilty and stability of the area. By combining this more specific, formal data with the less formal data mentioned earlier, it is possible to find solutions to the problems that the community identifies as most severe and important. Once the solutions have been identified and drawn up they are presented to the community at a level appropriate to them- this is usually in the form of visual data. ActionAid recognises that by including everyone in the discussions throughout the project means that not only will the majority of ideas be accounted for but also morale will high. ...read more.

In many cases the programmes are more specifically targeted at the women, especially in Africa where the women are the backbone of society. It aims to lessen the burden of women and to ensure that projects are productive as possible. Two main ways of doing this are by improving their agricultural methods and the supply of water, this is because many women spend a large percentage of the day collecting water. Ideally the status of women needs to improve, as presently in Africa it is low. The assume responsibility for most chores but are given little credit or independence. To conclude therefore, ActionAid plays a vital role in improving the quality of life in a large number of developing countries. It makes an appraisal of rural areas and from this it creates a number of Rural Development Areas where it targets its work- mainly in the field of agriculture, health and education. Although it is obviously necessary to incorporate the priorities of the government as ActionAid has often been asked to help, their principal underlying methodology is one of looking at the needs of the individual and their village. More specifically they discover from the villagers involved what they see their needs to be and from this devise programmes to fit in with these. ActionAid are also keen to provide the villages with 'user-friendly' solutions ie/ ones which the indigenous population understand, can afford, can design or make for themselves where appropriate and above all can relate to. Thus it is possible to conclude that although ActionAid is sensitive to the needs of the government they are more concerned with the needs of the individual. ...read more.