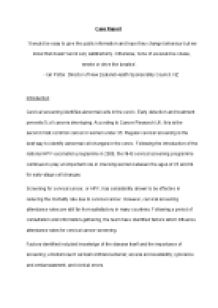 ï»¿Case Report ‘It would be easy to give the public information and hope they change behaviour but we know that doesn’t work very satisfactorily. Otherwise, none of us would be obese, smoke or drive like lunatics’. - Ian Potter. Director of New Zealand Health Sponsorship Council. NZ Introduction Cervical screening identifies abnormal cells in the cervix. Early detection and treatment prevents ¾ of cancers developing. According to Cancer Research UK, this is the second most common cancer in women under 35. Regular cervical screening is the best way to identify abnormal cell changes in the cervix. Following the introduction of the national HPV vaccination programme in 2008, the NHS cervical screening programme continues to play an important role in checking women between the ages of 25 and 64 for early-stage cell changes. Screening for cervical cancer, or HPV, has consistently shown to be effective in reducing the mortality rate due to cervical cancer. However, cervical screening attendance rates are still far from satisfactory in many countries. Following a period of consultation and information-gathering, the team have identified factors which influence attendance rates for cervical cancer screening. Factors identified included knowledge of the disease itself and the importance of screening; emotions such as fear/confidence/denial; access and availability; ignorance and embarrassment; and clerical errors. ...read more.

If they book an appointment with no intention of going, they will most probably not go. Bonelli et al (1996) found reasons women gave for not participating in the screening programme included lack of knowledge about the importance of the test, as well as considering the test to be of no benefit, considering themselves not to be at risk and a fear of embarrassment or pain. There was also an uncertainty pinpointed, as to whether the smear test is appropriate for certain age groups such as postmenopausal women, and also a link was found between low screening rates and ethnic-minority women, such as those of Asian origin. No matter how important something is, if it causes embarrassment, stress or anxiety, people are less likely to continue. The trouble with medical appointments is that they are formally written by a stranger, from a hospital, requesting your attendance for something which most people admittedly, by choice, don?t really want to put themselves through. Many women have explained how the whole process leading up to the examination is very structured, formal and doesn?t allow for people to express their worry ? they either have to turn up or not. ...read more.

Due to this, there is a higher possibility that girls miss one of more of these. This could be tackled using a more structured approach. Perhaps the students are given points, or some form of reward, when they have attended all 3. This would encourage them to return. It also needs reiterating to them the importance of having all 3, as they may have the first jab and then assume it won?t matter if they miss one. All in all, the answer to how to increase the number of women who attend screening is not black and white. All the factors explained in this case study need to be looked at and manipulated to have a more positive approach. The main problem seems to be a lack of knowledge on the patient?s part. It is then up to GP?s and the NHS to increase awareness, without scaring women but also without lessening the sense of importance of the screening. As the process continues, obstacles such as the flexibility for appointments need changing, such as an online screening sign up where women could pick appointments that suit them from a database of available times. They key seems to be making sure the patient feels in control of the situation, whilst being fully aware of all aspects involved. ...read more.