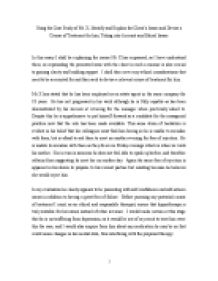 Hypnosis and Counselling for Self Esteem.Using the Case Study of Mr. X, Identify and Explain the Clients Issues and Devise a Course of Treatment for him, Taking into Account any Ethical Issues

﻿Using the Case Study of Mr. X, Identify and Explain the Client?s Issues and Devise a Course of Treatment for him, Taking into Account any Ethical Issues In this essay I shall be explaining the issues Mr X has expressed, as I have understood them, as expounding the presented issue with the client in such a manner is also crucial to gaining clarity and building rapport. I shall then cover any ethical considerations that need to be accounted for and then seek to devise a relevant course of treatment for him. Mr X has stated that he has been employed as an estate agent in the same company for 18 years. He has not progressed in his work although he is fully capable as has been demonstrated by his success at covering for the manager when previously asked to. Despite this he is apprehensive to put himself forward as a candidate for the managerial position now that the role has been made available. This same strain of hesitation is evident in his belief that his colleagues must find him boring as he is unable to socialise with them, but is afraid to ask them to meet on another evening for fear of rejection. He is unable to socialise with them as they do so on Friday evenings which is when he visits his mother. ...read more.

When your self-esteem is low, almost all areas of your life ? working, socializing, loving ? are made more difficult.? (Hadley and Staudacher). At this point I would also be looking out for any secondary gains or hidden agendas. I do suspect that he may have a secondary gain: he claims that he cannot propose to his girlfriend because ?he does not have much to offer her at present?, and so I wonder if perhaps he is scared that if he is promoted to manager, he will also now have more to offer her as he would be better off financially and in a more stable, respectable position. May he be frightened of the prospect of marriage? Does he feel incapable of being a good husband, of building a family and becoming a father himself? Does remaining in his position at work allow him to excuse himself from a range of other experiences? At such an early stage of the process however, I would not confront him with any of these speculations as it may cause offence, anger or upset. Instead I would continue with the suggested self-esteem script (see Appendix), affirmations and triggers, and if by the fourth session little progress has been made, I would hope that enough rapport has been built in previous sessions to allow me to explore the possibility of hidden agendas and secondary gains with him openly and truthfully. ...read more.

A bad self-image is self-fulfilling: it gives out bad vibes to others, making them dislike you, which increases your negative self-image and so on and so on.? Affirmations in my opinion work as a hammer persistently knocking away at the negative self-beliefs a person has until they have been smashed away. I would give him a simple phrase such as ?I am getting more confident each and every day? to repeat to himself and when possible to visualise himself with all that confidence because mental practise of confidence will improve confidence as well as taking physical steps to change. (Alder, 2009) I would hope that at four weeks we would have seen good progress in his self-esteem, resulting in him taking the steps towards those objectives he had set himself at the beginning of this course of therapy. I would hope that he has been enabled through this confidence to apply for his job, to broaden his social circle at work, to feel more relaxed and confident in his relationship with his girlfriend whether or not he decides to propose and to feel able to express himself to his mother without fear of her cutting remarks. If I found that issues with his mother were still presenting problems, I would consider referring him to a counsellor who can help him work through his issues regarding his mother. ...read more.