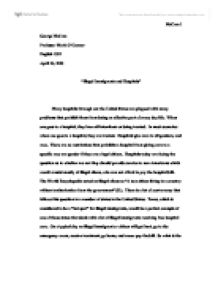 George McCrea Professor Mark O'Connor English 1302 April 26, 2003 "Illegal Immigrants and Hospitals" Many hospitals through out the United States are plagued with many problems that prohibit them from being an effective part of every day life. When one goes to a hospital, they have all intentions on being treated. In most scenarios when one goes to a hospital, they are treated. Hospitals give care to all genders, and race. There are no restrictions that prohibits a hospital from giving care to a specific race are gender if they are a legal citizen. Hospitals today are facing the question as to whether are not they should provide service to non-Americans which would consist mostly of illegal aliens, who can not afford to pay the hospital bill. The World Encyclopedia noted an illegal aliens as "A non citizen living in a country without authorization from the government"(51). There is a lot of controversy that follows this question in a number of states in the United States. Texas, which is considered to be a "hot spot" for illegal immigrants, would be a perfect example of one of those states that deals with a lot of illegal immigrants receiving free hospital care. ...read more.

Illegal residents will continue to leach off of taxpayer's money and receive free health care. As a taxpayer, I feel that I should have every right to disagree with illegal residents receiving free health care. Based on past experiences, I have witnessed the problem of illegal immigrants invading our hospitals only leads to problems for the hospital system. With the number of illegal immigrants and population increasing at an alarming rate, who knows how our emergency rooms will overcome this situation. Not only is this headed towards a major conflict but it also puts a lot stress on the citizens who have a right to receive some type of free health care. The shortage of nurses plus high population equals a colossal problem. In order to accommodate the surplus of illegal immigrants receiving free health care, the nursing field has to get back on track. This surplus of illegal immigrant receiving free health care is at the brink and has potential to get worse over the years. The hospital has enough problems dealing with legal citizens and cannot afford to waste money on non-residents. Over crowded emergency rooms and a shortage of nurses will continue to be a negative effect of these illegal residents invading our hospitals. McCrea 1 ...read more.