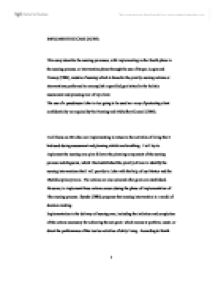 IMPLEMENTING CARE (NJ104) This essay describe the nursing processes, with implementing as the fourth phase in the nursing process, or intervention phase through the use of Roper, Logan and Tierney (1996), models of nursing which is based to the priority nursing actions or interventions performed to accomplish a specified goal stated in the holistic assessment and planning care of my client. The use of a pseudonym John is also going to be used as a way of protecting client confidentiality as required by the Nursing and Midwifery Council (2004). I will focus on Mr John care implementing in return to the activities of living that I had used during assessment and planning which was breathing. I will try to implement the nursing care plan follows the planning component of the nursing process and diagnosis, which I had established the priority of care to identify the nursing interventions that I will provide to John with the help of my Mentor and the Multidisciplinary team. The actions are also selected after goals are established. However, to implement these actions occurs during the phase of implementation of 7the nursing process. Synder (1985) proposes that nursing intervention is a model of decision making. Implementation is the delivery of nursing care, including the initiation and completion of the actions necessary for achieving the set goals: which means to perform, assist, or direct the performance of the twelve activities of daily living. ...read more.

Then, I did a risk assessment chart and fluid chart. For my nursing intervention, I decided to take his temperature, so I could monitor the fluctuations of his temperature. Pulse, blood pressure more often and to record his oxygen saturations, and respiration rate, which is important. An individual should be observed for rate, depth and pattern of breathing, so you could detect if tachypnoea as occurred which is an increased respiratory rate. According to Mallet et al (2000) respiratory rate could increase when the person is suffering from pneumonia. Bradypnoea occur when the respiratory rate decreased. I implemented a short term goal to achieve, so that he would comfortable and pain free within 20 minutes, to promote his well-being. I implemented a long term goal to achieve, so that he would feel in control of you're his pain within 12 hours, to ensure chest expansion, coughing and pain free movement has been achieved by John, as he stated of feeling sharp pain along his ribs. I referred him to physiotherapist as it has been required by the multidisciplinary team, and has been also send for chest x-ray. If the pain continued within the 20 minutes, I will decide another achievement, to give him a correct analgesia with the right route, dose and the right time. ...read more.

suggested that the nurse in charge should take responsibility for coordinating discharge plans. I referred John with the help of my Mentor, to a community rehabilitation nurse one week prior to discharge, to give him advice and information on the following as appropriate: breathing exercise, alcohol consumption and anxiety. After doing the nursing implementation of John, I documented all the agreed nursing interventions and outcomes on the appropriate notes, with the help of my Mentor and the Multidisciplinary team. Kenworthy et al (2002) believed that nursing documentation is not only to provide care of a person but also to communicate with the other members of the team. According to Heath (1995) the recording of client's medical needs or record is an important part of nursing process, it establishes a mechanism for communication among the members of the health care team and facilitated the evaluation of the individual and creates a permanent legal record of the care provided to the client. This essay has highlighted the nursing models and the process of implementing nursing care. I have also brought the concepts of care and methods of implementing through reflection and description I did about John holistic assessment and planning of care, by identifying his problems and needs, and trying to achieve the goals. During the process of implementing, I had always kept the patient focus about his treatment. I also give the reasons for the importance of documentation in nursing process. ...read more.