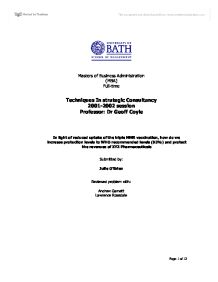 In light of reduced uptake of the triple MMR vaccination, how do we increase protection levels to WHO recommended levels (95%) and protect the revenues of XYZ Pharmaceuticals

Masters of Business Administration (MBA) Full-time Techniques In strategic Consultancy 2001-2002 session Professor: Dr Geoff Coyle In light of reduced uptake of the triple MMR vaccination, how do we increase protection levels to WHO recommended levels (95%) and protect the revenues of XYZ Pharmaceuticals Submitted by: Julie O'Brien Reviewed problem with: Andrew Garnett Lawrence Rosedale Contents Part A 3 Viable Firm Matrices 3 Purpose 3 Nature 3 Potential Uses 3 Part B 4 Introduction 4 Influence Diagram 4 TOWS Analysis 5 TOWS Potential Action Plan 6 Viable Strategy Matrix 7 Congruence Analysis 8 Resource Analysis 8 Force Field Analysis 10 Recomendations 11 Part C 12 Limitations and Benefits of the technique 12 Figures Figure 1 Viable Firm Matrix 3 Figure 2 Influence Diagram 5 Figure 3 TOWS analysis 6 Figure 4 Action Set from TOWS analysis 6 Figure 5 Assumptions Made To Create Action Plan 7 Figure 6 Action Plan Groups 7 Figure 7 Viable Strategy Matrix 8 Figure 8 Congruence Analysis 9 Figure 9 Resource Analysis 9 Figure 10 Force Field Analysis - Protection Levels 10 Figure 11 Force Field Analysis - Market Share 11 Part A Viable Firm Matrices Purpose The Viable Firm Matrix aids the identification of realistic ways forward for a complex problem. It does this by asking for the key factors involved in the problem to be identified. The factors are analysed individually for their current state as well as what other states they could be in. These are referred to as scenarios. Having identified the current scenario for each factor, future scenarios are also identified. A generic example of a viable firm matrix is shown in Figure 1. The current situation is highlighted in pink and the future scenario in green. The following should be noted: * It is a matrix that has optimally between 5 and 7 columns * These factors can create an acronym and need not be in any specific order * Each factor does not have to have the same number of scenarios ...read more.

T1, S7, S9, T9, T8, S3, S1 8 Figure 4 Action Set from TOWS analysis The actions come about by joining together different elements of the TOWS. For example by comparing the Governments role in the health of the nation in looking at O4, O7 and O8 we can link this with the fact we have no relationship with parents W6 in order to force the use of the triple. By doing this the Government are not having to pay for the more expensive singles version and therefore save cost, O2, S2 and S4. We have a long-standing relationship with the Government (S7) so we may be able to push this policy forward. However, I would also want to add in that T12 maybe against use in terms of what the Government is prepared to do with these types of reform. Also in our favour is the Governments current refusal to fund singles (S5), which is backed up by the research that says there is no risk with the triple (S3). Actual risk is far less than perceived risk (nearing to zero) Competitor has patent to current singles (we do not currently manufacture them) Sell preventatives, no cures at present. Expected cost of cure is greater than cost of prevention (to government) XYZ Pharma has a long-standing relationship with GPs and Government XYZ Pharma values - profits through public health assurance Figure 5 Assumptions Made To Create Action Plan Once we had worked through creating the actions from the TOWS analysis we checked back to our influence diagram to make sure we had captured all our thinking. This can be seen by connecting the last column in Figure 4 with the influence diagram in Figure 2. We also checked we had covered every TOWS element by looking at each of the actions and ticking off the relevant TOWS elements. From our TOWS we came up with a total of 10 actions. These actions can be grouped into the groups as shown in Figure 6. ...read more.

If facilitated well you should end up with the whole teams perspective. The technique is more successful when done as part of a team but an individual can use it. The whole process works better if there is some balance in the team where there are no dominant characters. Again a facilitator plays a role here. The whole technique is very problem independent, it can be used for any problem. You need to start with a question and getting this question right at the beginning can be an issue and may need several iterations of starting the process over again before you get the right one which can be frustrating. You must be careful in not letting heat of the moment solutions or ideas take over. This can be solved by allowing the whole process to take several days and allowing some reflection time as a fundamental part of the process. This definitely aided our analysis to the MMR problem as we ended one of the days with a force field analysis, which we rushed to get through as we were running out of time. However, we started the next session with a review of what the force field had achieved and with fresh eyes we came up with a far better analysis. This resulted in two force field analyses. An example of the techniques flexibility. It allowed the process to be adjusted to suit the particular problem. The technique could benefit with a 'WU' at the beginning for 'Warm Up'. Going into the technique cold can make the process hard work. A facilitator can aid this but if a team is going through the process for themselves to make it an explicit element to it would aid the rest of the process. As you do not need to reject elements of a problem the technique encourages debate rather than arguments. However it does require a certain amount of flexibility and imagination and dependent on what sort of group you are working with will limit what solutions are output from the process. Page 1 of 12 ...read more.