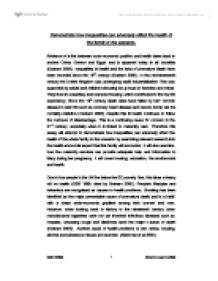 Demonstrate how Inequalities can adversely affect the health of the family in the scenario. Evidence of a link between socio-economic position and health dates back to ancient China, Greece and Egypt and is apparent today in all societies (Graham 2000). Inequalities in health and the risks of premature death have been recorded since the 19th century (Graham 2000). In the mid-nineteenth century the United Kingdom was undergoing rapid industrialisation. This was supported by adults and children labouring long hours in factories and mines. They lived in unsanitary and cramped housing which contributed to the low life expectancy. Since the 19th century death rates have fallen by half. Chronic disease in later life such as coronary heart disease and cancer dominate the mortality statistics (Graham 2000). Despite this ill health continues to follow the contours of disadvantage. This is a continuing cause for concern in the 21st century, especially when it is linked to maternity care. Therefore this essay will attempt to demonstrate how inequalities can adversely affect the health of the whole family in the scenario by examining relevant research into the health and social aspect that this family will encounter. It will also examine how the maternity services can provide adequate help and information to Mary during her pregnancy. It will cover housing, education, the environment and health. One in four people in the UK live below the EC poverty line; this takes a heavy toll on health (DSS 1998, cited by Graham 2000). People's lifestyles and behaviour are recognised as causes to health problems. Smoking has been identified as the major preventable cause of premature death and is a habit with a sharp socio-economic gradient among both women and men. However, when looking back in history to the nineteenth century when manufactured cigarettes were not yet invented infectious diseases such as measles, whooping cough and diarrhoea were the major causes of death (Graham 2000). ...read more.

A materialistic view would be of unsafe play areas, lack of space to play in high rise housing coupled with the inability to supervise their behaviour. He concluded that the environment dictated the behaviour of both mother and child. In this scenario the whole family will be affected by inequalities in health. Mary's elderly parents both suffer from illness. Her father suffers from asthma after working in the coal mines all his life, and her mother from arthritis. Her father is also at risk from COPD (Chronic obstructive Pulmonary Disease) as a result of working in the mines. This is a progressive disease that causes an obstruction of the airways. According to the National Statistics (2004) circularity disease was the highest single cause of death during 2001, averaging 378 per 100,000 for the United Kingdom. The scenario does not say if Mary's husband is obese, however if he is this significantly heightens his risk of ill health and chronic diseases. In winter the weather will affect both of them. Mary's mother has arthritis, inflammation of the joints which can be very painful and restricts movement. It is estimated that over 20 million people in the UK have a rheumatic disease (Weller 2000). With both parents illness restricting them to their own environment they could be at increased risk of becoming trapped in their own homes. With crime rates higher in poorer areas this could also have an affect on their quality of lives. Older people especially women are more likely to be the victims of theft. Fear of crime can cause mental stress and social exclusion. Older people tend to worry more about becoming victims, this may prevent them from attending local social events (Acheson 1998). Both parents present more stress to Mary's already stressful life. Neither can offer her any financial help, and with transport costs to consider childcare is not an option. ...read more.

The children in the scenario are growing up in a home of disadvantage. This may affect their chances of a good education and their future prospects as they mature to adulthood. They are likely to be undernourished and be growing up in cramped conditions that will affect their health. This will have a greater impact on them with another sibling joining their family, being another mouth to feed. The inability to travel between her parent's house and her own on a regular basis with a new baby and low income will have a considerable effect on Mary. There is a high risk of Mary becoming stressed and unable to cope at her inability to carry on caring for her parents as she has been doing. Mary's parents will also find this hard as they rely on her so much and may themselves become more socially disadvantaged. It is clear that people from the lower socio-economic groups are disadvantaged. They are more likely to be living in poverty, be unemployed or their partner may be out of work. These families may live in cramped conditions, dependant on state benefits and undernourished. As midwives interact with families during pregnancy, birth and the postnatal period they are best placed to give parents information. Historically, midwives have focussed on maintaining good health within their remit of normal birth and the detection of any complications. However, the increasing shortage of midwives in the United Kingdom makes it more and more difficult to care properly for these socially disadvantaged women. The only way to change this situation is through legislation that pulls these women up from the lower social classes by giving them a decent amount of money to live on, and the chance to work if they want to by providing them with cheap, safe care for their children, or the chance to return to education to train for a career that may well see them promoted to the higher end of the social class scale. ...read more.