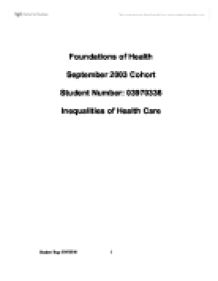 Foundations of Health September 2003 Cohort Student Number: 03970336 Inequalities of Health Care There can be many definitions of health; it is all in accordance with what the individual defines it as. Seedhouse (1987) and Blaxter (1990) suggest that it will mean many different things to many different people. "The definition of health is a contested issue, however in the late twentieth century there has been a development in health promotion work". (www.sunderland.ac.uk/~hs0bgr/enlec/enlec1) A persons own definition is very important as this is how you interpret your own and others health. One outlook on health by Antonovsky (1987) is that "health can be viewed as the opposite to illness in a traditional sense or it can be interpreted as being a continuum between health/ease and dis/ease". This essay will be outlining some of the inequalities of health and what has been done to improve them, also what can be done in the future to combat the inequalities. Health inequalities can and are directly caused by differences in "socio-economic status, ethnicity and ability and ultimately related to differences in income, education, employment, material environment and lifestyle" (www.nhsdirect.nhs.uk, 2004). These inequalities also coincide with the biological and psychological factors, which will be covered as part of this essay. ...read more.

Healy in 1998 speaks about the damaging effects that an individual who lives in an affluent society who is considered to be living in poverty or deprivation may suffer, compared with an individual who lives in a less affluent society who lives in absolute poverty and found that the first individual suffers greater detrimental effects. People living in neighbourhoods where the levels of crime are high can often suffer with ill health such as depression, this can lead to a greater incidence of smoking, alcohol consumption and also the misuse of drugs. When investigating biological inequalities in health, there are uncontrollable differences in the gender of an individual, which can have an affect in later life. With an increased level of suicide attempts in males rather than females, there has been recent evidence suggesting that males find it more difficult to deal with stress. An article published in May 2000 by the New York Times attempted to investigate the differences in how males and females respond to stress, the article highlighted the fact that males tend to suffer more than females with stress related illnesses and effects such as hypertension and drug and alcohol abuse. (www.frogpond.com/articles, 2004) Research has been undertaken into the relationship of social ties and the ability to cope, it has been found that because ...read more.

which entitles all school children of the ages four to six to receive a free piece of fruit each day. (www.nih.gov/news/WordonHealth/jun2002/childhoodobesity) There are many inequalities in health which can be investigated and also many health promotion activities and initiatives which are in place. Hopefully this essay has given an insight into the inequalities in health and highlighted what is being done at present and what the ideas and plans for the future are. It has been demonstrated that biological, sociological and psychological factors all have an influencing effect on one another and can all be a contributing factor towards the detriments in health. With the involvement of the government and the support of local authorities, there is hope that these inequalities can be reduced. This essay has concentrated on health promotion within education and schooling - the subject can be considered as a major starting block for the eradication of any health inequalities that may arise in early childhood. Children are considered to be our investment for our future and need to be well cared for and if generations to come are to be free from health inequalities then the current education system needs to be increasingly improved. There will always be some minor inequalities in health such as gender and age but these are permanent factors, which cannot be controlled. ...read more.