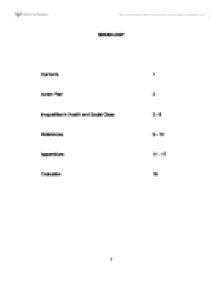 Inequality in health and social class.

SOCIOLOGY Contents 1 Action Plan 2 Inequalities in Health and Social Class 3 - 8 References 9 - 10 Appendices 11 - 17 Evaluation 18 ACTION PLAN What the report will cover Type of evidence needed The target has been achieved when An introduction to the concept of inequality. General information on the NHS. A paragraph to introduce the availability of health care. Illustrate that health inequalities are due to social class. Explanations of how social class is determined. A paragraph including how social class is measured including examples of classifications included in appendix. Information on differences in health across the different social classes. Include three pieces of evidence to prove that inequalities exist in different areas. A paragraph on poverty including data to provide evidence. A paragraph on unemployment and suicide rates, includes data in appendix. A paragraph explaining drug use is a response to social breakdown, including tables in appendix. The government's actions to tackle inequalities. Government initiatives to address inequalities. A paragraph including information on health action zones and sure start. A conclusion. Tackling inequalities are a problem in Britain and attitudes to health need to change. A paragraph explaining that the differences between social classes are wrong and these problems need addressing. Reference pages. Include references throughout. Pages listing all references using 'The Harvard System'. Appendix. Include tables with appropriate data. Pages with headed tables including figures for inequalities covered. ...read more.

Health Action Zones are new ways of tackling health inequalities in some of the most deprived areas in England. As well as tackling key priorities such as coronary heart disease, cancer and mental health, and issues such as teenage pregnancy, drug (misuse) prevention in vulnerable and young people and smoking cessation, they are addressing other independent and wider determinants of health. Additional priorities include housing, education and employment. The initiative brings together organisations within and beyond the NHS to develop and implement a locally agreed strategy to improve the health of local people. All the Health Action Zones are based on seven key founding principals, (figure 6, page 16). Each Health Action Zone focuses on addressing its major health and services priorities. Altogether more than �274 million was made available to assist these zones in the three years from April 1999. This funding has been used to leverage charges in the more substantial budgets of health and local authorities. The 26 health Action Zones (figure 7, page 17) range in population from 180,000 to 1.4 million people and cover over 13 million people in total. They are located in some of the most deprived areas in England, including inner cities, rural and ex-coalfield communities. (www.doh.gov.uk) The government has also invested into another project called Sure Start. This is a cornerstone of the government's drive to tackle child poverty and social exclusion. ...read more.