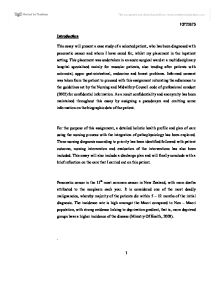 Introduction This essay will present a case study of a selected patient, who has been diagnosed with pancreatic cancer and whom I have cared for, whilst my placement in the inpatient setting. This placement was undertaken in an acute surgical ward at a multidisciplinary hospital specialized mainly for vascular patients, also tending after patients with colorectal, upper gastrointestinal, endocrine and breast problems. Informed consent was taken from the patient to proceed with this assignment reiterating the adherence to the guidelines set by the Nursing and Midwifery Council code of professional conduct (2002) for confidential information. As a result confidentiality and anonymity has been maintained throughout this essay by assigning a pseudonym and omitting some information on the biographic data of the patient. For the purpose of this assignment, a detailed holistic health profile and plan of care using the nursing process with the integration of pathophysiology has been explored. Three nursing diagnosis according to priority has been identified followed with patient outcome, nursing intervention and evaluation of the interventions has also been included. This essay will also include a discharge plan and will finally conclude with a brief reflection on the care that I carried out on this patient. Pancreatic cancer is the 11th most common cancer in New Zealand, with more deaths attributed to the neoplasm each year. It is considered one of the most deadly malignancies, whereby majority of the patients die within 5 - 12 months of the initial diagnosis. The incidence rate is high amongst the Maori compared to Non - Maori population, with strong evidence linking to deprivation gradient, that is, more deprived groups have a higher incidence of the disease (Ministry Of Health, 2008). . The clinical picture Mrs. Brown (pseudonym) is a 72 yr. old married Cook Islander who presented to the emergency department (ED) with abdominal pain at the epigastric region, jaundice, Per Rectal (PR) ...read more.

Tea colored urine is also due to high bilirubin in the blood which causes increased filtration of bilirubin by the kidneys into the urine giving it the dark coloration. Obstruction of bile flow into the duodenum also causes decreased fat emulsification because of low or absent bile salts causing decreased fat digestion and absorption resulting in high fecal fat excretion. According to Porth (2002) if there is obstruction to the ampulla of vater there will be more fecal fat excretion because now the excretion of pancreatic enzyme especially lipase for fat digestion is also affected. Hence if there is no lipase there will be no fat digestion. The term to describe this condition is steatorrhoea whereby you have loose, pale, fatty, floating offensive bowel motions, the condition that Mrs. Brown presented with. Mrs. Brown presented with most of the complications arising from pancreatic cancer like obstruction of the duodenum and biliary ducts. She also presented to the ED, with PR bleeding which is one of the complications due to pancreatic cancer. PR bleeding is due to gastrointestinal hemorrhage when the growing tumor compresses and erodes the portal venous system causing frank bleeding. Fever, another complication is a life threatening condition which can occur when there is neutropenia (low neutrophil count) resulting from cancer which makes the person more prone to infection. Mrs. Brown also has the tendency to develop malignant ascitis which can result from liver metastasis. From ascitis she can develop respiratory problems, heart failure due to pulmonary edema caused by the diffusion of the peritoneal fluid intravascularly. Splenomegaly can be caused by the encasement of the splenic vein by the tumor. Glucose intolerance can be facilitated even though she already has the history of it. As the tumor grows it can cause gastric outlet obstruction leading to nausea and vomiting. Another complication of pancreatic cancer is migratory thrombophlebitis which is the presence of several blood clots along the veins. ...read more.

According to Crisp and Taylor (2005), nurses use the theoretical frameworks to guide them in assessing the special needs of the patient. One of the nursing models used by nurses is the Kubler- Ross's stage theory. This theory describes the stages a patient goes through when faced with loss and grief. The stages being denial, anger, bargaining followed with depression and then acceptance of the disease. However the patient can demonstrate any stage at any given time. From the question that Mrs.Brown put forward to me, I could identify that she was going through the anger phase of the Kubler-Ross's stage theory. To get Mrs. Brown to the acceptance stage, the most appropriate way to deal with it, which according to Crisp and Taylor (2005), is an open and honest therapeutic communication. Having searched the relevant literature on therapeutic communication and loss and grief, I now feel that that I have the knowledge, skills and understanding to cope with situations that I first deemed challenging. However, I do feel that challenging situations come at different times at different level and competence in dealing with it evolves with time and experience. Reference Brown, D. & Edwards, H. (Eds.). (2008). Lewis's medical-surgical nursing. Assessment and management of clinical problems. (2nd ed.) Sydney, Australia: Elservier, Mosby. Bryant, B., & Knights, K. (2007). Pharmacology for health professionals. (2nd ed.). Sydney: Elsevier. Chernecky, C. C., & Endy, K. M. (2008). Acute care oncology nursing (2nd ed.). Marrickville, Australia: Elsevier. Crisp. J., & Taylor, C. (Eds.). (2005). Potter & Perry's fundamentals of nursing (2nd Australasian ed.). Marrickville, Australia: Elsevier Australia Huether, S. & McCance, K. (Eds.). (2004). Understanding pathophysiology. (2nd ed.). Philadelphia: Elsevier, Mosby. Lim, P. H., & Locsin, R. (2006). Music as nursing intervention for pain in five Asian countries. International Nursing Review 53(3), Retrieved May 20, 2009, from CINAHL database. Ministry Of Health (2008). Incidence of pancreatic cancer. Retrieved on May 19, 2009 from http://www.moh.govt.nz/moh.nsf/82f4780aa066f8d7cc2570bb006b5d4d/8 e1d731682cab3d9cc256c7e00764a23/$FILE/29-pancreatic.pdf Porth, C. M. (2002). Pathophysiology: Concepts of Altered health status (6th ed.). Philadelphia: Lippincott Williams & Wilkins. . ?? ?? ?? ?? 10722675 1 ...read more.