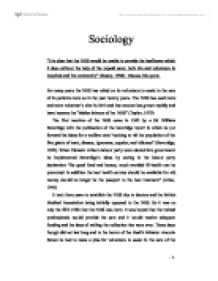 &quot;It is clear that the NHS would be unable to provide the healthcare which it does without the help of the unpaid carer, both kin and volunteers in hospitals and the community&quot; (Stacey, 1998). Discuss this quote.

Sociology "It is clear that the NHS would be unable to provide the healthcare which it does without the help of the unpaid carer, both kin and volunteers in hospitals and the community" (Stacey, 1998). Discuss this quote. For many years the NHS has relied on its volunteers to assist in the care of its patients more so in the past twenty years. The NHS has used more and more volunteer's sine its birth and that amount has grown rapidly and have become the "hidden labours of the NHS" (Taylor, 1979) The first mention of the NHS came in 1942 by a Sir William Beveridge with the publication of the beveridge report in which he put forward his ideas for a welfare state "seeking to rid the population of the five giants of want, disease, ignorance, squalor, and idleness" (Beveridge, 1942). When Clement Attlee's labour party were elected into government he implemented Beveridge's ideas by stating in the labour party declaration "By good food and homes, much avoided ill-health can be prevented. ...read more.

In later years it was with the publication of the Wolfenden Report (1978) which stipulates that ideas of the voluntary sector of institutions through which social needs could be addressed and work along side the public, state, informal and the private sector. "The Wolfenden Committee (1978) sponsored research that maintained that voluntary organisations were cost effective, innovative, flexible and pioneering. Welfare pluralists have argued that voluntary organisations responsive, close to needs, participative and empowering, especially in contrast with local service provider partners" (Hadley and Hutch, 1982). It is now a necessity for the NHS to employ volunteers due to budget and resources "The cost of the NHS is increasing" (Bevan, 1948). The need now is much greater as our lifestyles and habits are changing. Some voluntary workers within the NHS tend to feel inadequate compared to the trained and qualified colleagues. Many volunteers have abandoned their post because of this very feeling. ...read more.

The elderly too can be carers they may have to care for a spouse, parent, sibling or even their own child. In some of these cases the carer themselves needs care due to age related illness. Now many hospitals have their own charity attached to them which help to raise awareness of the hospitals needs and to help raise money to buy new equipment. If the government would fund the NHS more effectively the need for charities and volunteers would become a thing of the past. Reference Atlee, C. (1945) "Modern History Sourcebook: Let us face the Future: A Declaration of Labour Party policy for the Nation, 1945" [online] available from http;//www.forhan.edu/mod/1945labour-letusfacethefuture.html Bevan, A (1948) "Medicine through time- The National Health Service" [online] available from http;//www.bbc.co.uk/education/medicine/ph/mophes2.shtml Beveridge, W. (1942) "Medicine through time- William Beveridge (1879-1963)" [online] available from http;//www.bbc.co.uk/education/medicine/nonit/modern/mophi2.shtml Beveridge, W. (1948) "Medicine through time- William Beveridge (1879-1963)" [online] available from http;//www.bbc.co.uk/education/medicine/nonit/modern/mophi2.shtml Hadley, R. & Hutch, S. (1982) "Social Welfare and the Failure of the State" London: Allen & Unwin Stacey, M. (1998) "The Sociology of Health and Healing" London: Unwin Taylor, J. ...read more.