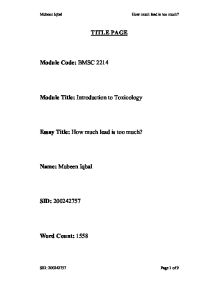 TITLE PAGE Module Code: BMSC 2214 Module Title: Introduction to Toxicology Essay Title: How much lead is too much? Name: Mubeen Iqbal SID: 200242757 Word Count: 1558 How much lead is too much? Introduction Lead is a toxic, soft, malleable metal with four isotopes. It exists in organic and inorganic forms, its atomic number is 82 and it has the symbol Pb. Lead is found in ore with zinc, silver and copper. The most common lead ores are galena, cerussite, and anglesite. The melting point of lead is 327 oC, it is very resistant to corrosion, and it is a poor conductor of heat and electricity. These are some of the main properties which have led to the extensive use of lead for thousands of years. Currently lead is used in battery acid, organ pipes, weights, bullets and for many other functions and purposes. In the past lead was also used in plumbing, in the manufacture of toys, in alcohol, in paint, and most notably, in leaded fuel. However these former uses have almost all now been discontinued, in the Western world at least, due to the increasing recognition of the health risks and the toxic effects of lead. Lead toxicity is thought to have first been recognised by the Greek physician Nicander of Colophon, who described the detrimental effects of lead ingestion in his books, which are the oldest to have survived on the subject of poisoning (Needleman, 2004). ...read more.

It also has damaging consequences on the reproductive system, resulting in abnormally low sperm count in men, and infertility, irregularities in the menstrual cycle and stillbirths in women. Treatment of lead poisoning The most essential aspect of treating lead poisoning is reducing the exposure to lead. Chelation therapy is also used to reduce blood lead levels. This involves administration of drugs such as EDTA and DMSA, which bind to lead and flush it out through the urine. Lead poisoning in adults Lead poisoning in adults occurs mainly through occupational exposure. Workers in industries such as painting, construction, steel, car manufacture and repair, scrap metal and many others are at risk of substantial exposure to lead. People employed in these industries are also likely to affect those who come into close proximity with them, via a phenomenon known as 'take-home lead' (Czachur et al., 1995). This is when the worker inadvertently exposes their family members or others with whom they have contact, through contaminated skin, clothes, or equipment, or even by washing polluted clothes with another person's uncontaminated clothes. The chief causes of acute lead poisoning in adults are the use of folk remedies containing lead, and the consumption of 'moonshine', a term used to refer to illicit alcohol which is contaminated with lead, due to the use of car radiators in its manufacture. ...read more.

The increasing recognition of the severity of lead poisoning in children has caused recommended blood lead levels to drop as shown in Figure 3. Figure 3. Lowering of the recommended action level for blood lead in children over time by the Centers for Disease Control and Prevention (CDC) in America. Taken from: http://www.atsdr.cdc.gov/csem/lead/pb_standards2.html However, despite the lowering of the recommended action level of blood lead to 10 �g/dL in 1991, the CDC has been under pressure from various researchers (Gilbert 2006; Bernard, 2003) to further lower the recommended action level due to extensive and growing research which suggests that exposure to lead leading to blood lead levels of even less that 10 �g/dL. For example, Canfield et al. (2003) showed 'a loss of 7.4 IQ points for a lifetime average blood lead concentration of up to 10 �g/dL' and concluded that 'the total lead-related impairment ... is due largely to the initial IQ loss at blood lead concentrations of 10 �g/dL or less'. Conclusion Despite the harmful effects of lead being recognised for thousands of years, the full extent of the severity of lead toxicity, especially in children, has only been acknowledged recently. Renowned researchers and experts in the subject, such as Needleman (2004) and Gilbert (2004), have now come to the conclusion that there is no safe limit for lead exposure, particularly for children, for whom the effects of lead toxicity have been documented to cause long term learning difficulties, severe nervous system disorders, and susceptibility to commit crime, even at extremely low levels of blood lead. ...read more.