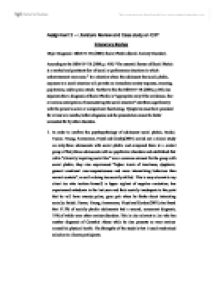 Assignment 2 - Literature Review and Case study on CBT Literature Review Major Diagnosis: DSM-IV-TR (2000): Social Phobia (Social Anxiety Disorder). According to the DSM-IV-TR (2000, p. 450) "The essential feature of Social Phobia is a marked and persistent fear of social or performance situations in which embarrassment may occur." In a situation where the adolescent has social phobia, exposure to a social situation will provoke an immediate anxiety response, sweating, palpitations, and/or panic attack. Further to this the DSM-IV-TR (2000, p.450) also stipulates that a diagnosis of Social Phobia is "appropriate only if the avoidance, fear or anxious anticipation of encountering the social situation" interferes significantly with the person's social or occupational functioning. Symptoms must have persisted for at least six months, before diagnosis and the presentation cannot be better accounted for by other disorders. 1. In order to confirm the psychopathology of adolescent social phobia, Beidel, Turner, Young, Ammerman, Floyd and Crosby(2007) carried out a clinical study on sixty-three adolescents with social phobia and compared them to a control group of forty three adolescents with no psychiatric disorders and established that while "clinically impairing social fear" was a common element for the group with social phobia, they also experienced "higher levels of loneliness, dysphoria, general emotional over-responsiveness and more internalizing behaviors than normal controls", as well as being less socially skilled. This is very relevant to my client Joe who isolates himself, is hyper vigilant of negative evaluation, has experienced anhedonia in the last year and feels socially inadequate to the point that he will have sweaty palms, goes pale when he thinks about interacting socially. Beidel, Turner, Young, Ammerman, Floyd and Crosby (2007) also found that 57.1% of socially phobic adolescents had a second, concurrent diagnosis, 75% of which were other anxiety disorders. This is also relevant to Joe who has another diagnosis of Cannabis Abuse while he also presents as very anxious around his physical health. ...read more.

Joe is very interested in astronomy and questions "why we are here". He believes there is a yet undiscovered good reason why we are really here and wants to be the person who discovers this. Joe does not have a girlfriend. Joe's symptoms include Emotional symptoms: fear, anxiety, anger, irritability, and hopelessness Cognitive symptoms: Fear of negative evaluation, thoughts of death and dying, low self esteem, existential questioning, constant negative thoughts about himself. Behavioural symptoms: avoidance of social situations, Social withdrawal from friends, angry outbursts, verbal and physical aggression targeted at mother, mostly staying in his room when home. Joe is spending a lot of time playing computer games (fantasy world). Joe never answers the phone, never goes out unless he is with his mother. Physiological symptoms: Sweating, palpitations, goes pale, gastrointestinal discomfort, initial insomnia. Going to bed at 2am, and waking up at noon. Joe also reports vivid dreams that worry him. Medical History Joe was medically cleared before accessing CAMHS and did not present with any medical problems which may have been impacting his psychological functioning. Mental Status Examination Joe attended dressed in dark jeans and wore a sweater with a hoody covering his head and long hair shading his eyes. Intermittent eye contact achieved throughout the session. He had not wanted to come so was initially sullen and unresponsive. In one to one session quickly developed good level of rapport. He was very focused and participative. Speech was very articulate and spoke openly. Thought form appropriate recognising that his fears may be unfounded but acknowledging that fears are very real for him. Joe's speech and language was normal and no perceptual disturbances were noted. Joe had some insight into his difficulties although was ambivalent about changing things at that time. DSM-IV Diagnoses Axis I: Social Phobia (Social Anxiety disorder) 300.23, Cannabis Abuse Axis II: Nil Axis III: Nil Axis IV: Difficult relationship with mother, no friends. ...read more.

It was stated to Joe that given the nature of CBT a specific requirement was that he be willing to engage in therapy without coercion and attend regularly otherwise it would not work. Joe rang a week later asking for another appointment and asking that he continue with CBT. Session two - This started with learning some useful relaxation techniques, especially given that he was very tense when he first came in. This was followed by an introduction to the CBT model and cognitive restructuring, which took the form of searching for the evidence that supported his core beliefs that he was unlikeable, boring, inadequate and not good enough. We then used the pie chart to determine how much of that is actually true; by the end of the session Joe admitted that his view of himself and others may not be very realistic. His homework was to go home and try to respond to his automatic thoughts through thought catching when he started to think negatively. Interventions/Procedures 1. Skate board five part model 2. Cognitive restructuring and thought catching 3. Role plays Our first few sessions included utilising the five part model depicted as a skateboard to reflect on Joe's cognitions, behaviours, feelings and physical reactions when faced with a situation of having to interact socially. Joe initially had difficulty remembering recent events in which he had become anxious in a social situation. We therefore utilised a role play which helped to trigger his memory of a recent event. We discussed identifying, measuring and responding to his automatic thoughts in a more helpful way as opposed to immediately jumping to negative conclusions. Obstacles Difficulty trying to shift Joe's rigid thoughts about other's opinions and perceptions of him. Reliability as far as attending sessions regularly may be a problem. Carrying out homework is a problem as he did not do the homework given him in the first session Outcome No outcome as yet as we have had two sessions of CBT. Joe remains reluctant to completely shed his negative automatic thoughts and states that he views them as a security blanket. ...read more.