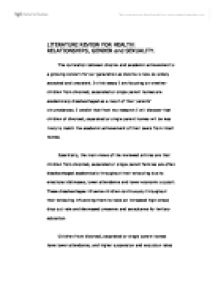 The correlation between divorce and academic achievement is a growing concern for our generation as divorce is now so widely accepted and prevalent. In this essay I am focusing on whether children from divorced, separated or single parent homes are academically disadvantaged as a result of their parents’ circumstances. I predict that from my research I will discover that children of divorced, separated or single parent homes will be less likely to match the academic achievement of their peers from intact homes.

Essentially, the main views of the reviewed articles are that children from divorced, separated or single parent families are often disadvantaged academically throughout their schooling due to emotional distresses, lower attendance and lower economic support. These disadvantages influence children continuously throughout their schooling influencing them to have an increased high school drop out rate and decreased presence and acceptance for tertiary education.

Children from divorced, separated or single parent homes have lower attendance, and higher suspension and expulsion rates therefore this reflects their lower grades and academic achievement. “Children from disrupted marriages were over 70 percent more likely than those living with both biological parents to have been expelled or suspended” (Dawson). This is theory is supported by the studies of High School counsellor Barry Ham (2003) who concluded that the lower grades probably reflect the differences in attendance as “the high school seniors from divorced households missed almost 60% more class periods than did those from intact families”. Due to these students missing valuable class time they have been unable to gather sufficient information to successful understand relevant topics and therefore lowered their grades in comparison to students of intact families who attend more classes. Mitchell (1985) found that many parents from her study had mentioned or noticed truancy by their sons only and thought parental separation to be the cause. But none of the custodial parents saw this to be there own fault, rather that it was the fault of the other parent. Ham (2003) found contradictory evidence stating that “for both grades and attendance... females were more greatly impacted negatively by divorce than were males”. This contradiction in evidence can be attributed to the different eras in which information was gathered, with Hams research being more recent.

In a report by ‘USA Today’ in 2002 researchers of a new study fromOhio State University, theorise that the children to begin with may fall behind academically and then not be able to catch up, or alternatively that once they have fallen behind they lose self-esteem and motivation to continue on. Ham (2003) established that "those students from intact families outperform those students from divorced families across all categories” and that students from intact families maintained grade point averages (GPAs) 11% higher than those of peers from divorced families. A 1993 study by Zill et.al., supports this conjecture as they found that children of divorced parents were “twice as likely as children from intact families to drop out of school. This pattern remained even years after the divorce”. Doyle (1976) had similar findings concluding that "More than one in three children of broken families drop out of school."McLanahan and Sandefur (1994) also found that "Teens from single-parent homes are twice as likely to drop out of high school [or to] become teen parents, and one-and-one-half times more likely to stay at home has young adults." Pannor and Schild (1960) suggested that parents who think that is best for children may be blinded to realising that marital breakdown may be the cause for children’s bad behaviour. On the other hand Ferri (1976) found some lone parents admitting to possible exaggeration of their children’s problem behaviour.

Many researchers attribute the lower academic achievement rate to lower income. McLanahan and Sandefur (1994) stated that economic poverty was the most significant aspect when investigating the poor academic achievement of children from single-mother homes. Downey (1994) agreed, declaring that “economic distress must be considered when attempting to understand the academic difficulties of children from mother-led homes”. “Mother-only families are more likely to be poor” (Garfinkel and McLanahan 1986) this often due to the lower income and employment rate for women as well as that generally before the divorce the father was the main ‘bread winner’. There are numerous ways which poverty can affect children’s academic achievement and education. Single parents with lower income often live in lower socio-economic areas with poorer quality schooling available. As well as this lower family income meant less ability for stimulating resources extra-curricular activities, for example music lessons, sports equipment, and camps. Downey (1994) found that 26% of single fathers were able to provide their children with computers for educational use, while only 16% of single mothers were able to do the same, supporting McLanahan and Sandefur’s views of availability of resources. McLanahan and Sandefur (1994) in addition established that mothers who had to work longer hours at low-paying jobs had less time to be involved in their children's daily lives, especially related to their schooling. This meant less time to assist with and monitor completion of homework. Mothers who worked long hours tended to be overwhelmed with their parenting responsibilities and could offer less academic support to their children (McLanahan and Sandefur, 1994).

Most of the literature reviewed supported each other in concluding that divorce academically disadvantages children not just during the time of its occurrence but also continuously throughout the child’s education. Many researchers found this to be due to lower economic status. Others mentioned truancy and lack of motivation which is linked to rebellion and emotional distress. Much of the research focussed negatively of single mother families stating that due to lower incomes for women mothers were often absent and unable to not only assist with homework but also to monitor its completion. The only contradiction that I observed was that Mitchell (1985) stated that it was boys who committed truancy, where as Ham (2003) established that “for both grades and attendance … females were more greatly impacted negatively by divorce than…males”. This inconsistency can be attributed to the different eras in which the research was conducted. My prediction that children of divorced, separated or single parent homes will be less likely to match the academic achievement of their peers from intact homes was supported by my research, although I do believe that there are exceptions, even if research does not find this evidentiary.