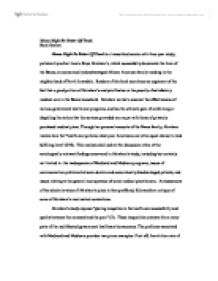 Mama Might Be Better Off Dead: Book Review Mama Might Be Better Off Dead is a transcribed version of a three year study, partaken by author Laurie Kaye Abraham's, which successfully documents the lives of the Banes, an economically disadvantaged African American family residing in the neighborhood of North Lawndale. Readers of this book soon become cognizant of the fact that a good portion of Abraham's analysis fixates on the paucity of satisfactory medical care in the Banes household. Abraham works to uncover the effectiveness of various government health care programs, and has the ultimate goal of confirming or dispelling the notion that the services provided are on par with those of privately purchased medical plans. Through her personal accounts of the Banes family, Abraham reveals how the "health care policies cheat poor Americans out of an equal chance to lead fulfilling lives" (259). This analysis shall submit for discussion a few of the sociologically relevant findings uncovered in Abraham's study, including but certainly not limited to: the inadequacies of Medicaid and Medicare programs, issues of communication problems between doctors and economically disadvantaged patients, and issues relating to the general incompetence of some medical practitioners. An assessment of the scholarly value of Abraham's piece is then proffered, followed by a critique of some of Abraham's most salient contentions. ...read more.

For instance, the superlative of incompetent would not even be able to capture the ineptitude of Dr. Marino, who even failed a basic review by his co-workers (72). The review team deemed Dr. Marino as unfit for practice and even recommended that he consider revising his practices (72), yet he was allowed to practice on economically disadvantaged patients. It is alarming to see that doctors who lack basic competence in their field of practice are allowed to treat unknowing patients. This is one of the most salient examples of the inequalities that the poor confront. Treatment administered by doctors of ill repute is something that patients from higher socioeconomic statuses would never tolerate. One has to begin to wonder then how inequities such as these ever transpired in a country that advocates equality for all. In addition to occupational incompetence, many doctors haven't been fully assimilated into the American way of life. They are often unaware of the norms and folkways that guide the lives of many of their patients, and are often unable to successfully comport themselves in their occupational milieus. Profiles of the doctors at Mount Sinai hospital verify that none were born in the United States, which could definitely effect communication between them and their patients (230). The inadequacies that characterize the Medicaid and Medicare programs, the issues of communication problems between doctors and economically disadvantaged patients, and ...read more.

and "grabbed" (76), all of which had a very negative connotation. Abraham employs the usage of negative words to portray these doctors as cold, unsympathetic machines who exist to make the lives of poor citizens more painful that they already are. Her criticisms bound on the border of superfluity at times, and become somewhat redundant and unfruitful. Yet one should be able to understand why she unleashes her reservoir of emotion. Her passion for her work is unequivocally apparent, which compensates for her slight bias. The economically disadvantaged are severely cheated out of adequate healthcare. Programs such as Medicare and Medicaid, which are intended to aid the poor, while on a superficial level seem to be adequate, fail to take into account that other factors stemming from impoverishment may affect who is able to take advantage of the available programs. Even for those who are fortunate enough to go to the hospital, they still face many problems once they begin to be treated. Many of the economically disadvantaged lack the requisite social and cultural capital (due to institutionalized racism, unequal education, etc.) that is required to effectively communicate with medical practitioners and to fully understand the ailments that afflict them. In any case, a change in the health care system is in short order. One can only hope that Laurie Kaye Abraham's book Mama Might Be Better Off Dead will encourage public debate on this issue, which would hopefully address this problem with the utmost expediency. ...read more.