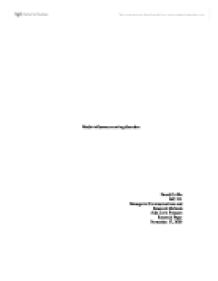 Media-influence on eating disorders David Griffin MC 511 Managerial Communications and Research Methods Aida Livia Prescura Research Paper November 17, 2003 Media is constantly shaping our society. Being a major part of our lives, it has a lot of influence on how we dress, what we buy, how we act and what we believe in. One way that media has a negative effect is how it promotes the ideal body image by commercials portraying beauty as being thin and flawless, with serious consequences on mental and physical health, even starting childhood. Media also have positive effects by providing educational messages to combat unhealthy attitudes. Therefore, it is clear that media plays an important role in influencing body-image, self-esteem, eating behaviour and implicitily, on eating disorders. The media is an important aspect of life in our culture. Everybody own a TV set and read newspapers and magazines. In addition, people interact with a wide variety of other media such as music delivered by CD or videos and communications via personal computers. Each form of media has different purpose and content. The media seeks to inform us, persuade us, entertain us, change us. ...read more.

This especially occurs during the adolescence stage when young girls are very sensitive about their changing bodies. "Young women are increasingly tuned in to a celebrity culture where the models and actresses' bodies are considerably thinner than they've been in the past", said Dr. Brumberg, a historian at Cornell University (8). There is no doubt that media provides significant content on body related issues to young women. The exposure to ideal images coincides with a period in their lives where self regard and self efficacy is in decline, where body image is at most fragile due to physical changes of puberty and where the tendency for social comparison is at its peak. The most important point, the negative effect of the media on eating disorders and its consequences is the topic for many studies. Eating disorders are complex illnesses that arise from a combination of psychological and sociocultural factors with serious consequences on mental and physical health. This issue is very important to society. Eating disorders are more than the average diet and have the potential to be life threatening (Steinhoff, 363). The media is aware of the problem of eating disorders and some have tried to incorporate different body shaped models, but many do not believe that they are doing any harm by using underweight models. ...read more.

In addition, awareness of eating disorders, through magazines, articles and television programs may educate people about the danger of abusing food and may help to make sufferers aware that they have a problem and they are not alone. In this respect the media may have two useful roles: first, in health promotion for the public at large and the second, in the arena of primary prevention. Health promotion seeks to promote healthful behaviours or attitudes to the public at large. Primary prevention is an activity designed to eliminate ineffective factors involved in the causation of a disorder. By promoting sensible messages, however, they may impact on those individuals in society who are vulnerable and who may otherwise filter unhealthy messages. The relation between media exposure and eating disorders is very tight. Media continues to model unhealthy eating attitudes and behaviours. Also, in a smaller measure, it prevents this negative effect. One of the ways we can protect our self-esteem and body image from the media's often narrow definition of beauty and acceptability is to become a critical viewer of the media messages we are bombarded with each day. Media messages about beauty and body shape and size will affect the way we feel about our bodies and ourselves only if we let them. ...read more.