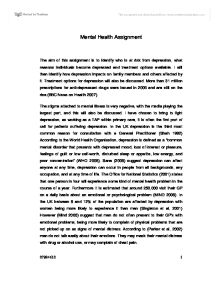 Mental Health Assignment The aim of this assignment is to identify who is at risk from depression, what reasons individuals become depressed and treatment options available. I will then identify how depression impacts on family members and others affected by it. Treatment options for depression will also be discussed. More than 31 million prescriptions for anti-depressant drugs were issued in 2006 and are still on the rise (BBC News on Health 2007). The stigma attached to mental illness is very negative, with the media playing the largest part, and this will also be discussed. I have chosen to bring to light depression, as working as a TAP within primary care, it is often the first port of call for patients suffering depression. In the UK depression is the third most common reason for consultation with a General Practitioner (Shah 1992) According to the World Health Organisation, depression is defined as a "common mental disorder that presents with depressed mood, loss of interest or pleasure, feelings of guilt or low self-worth, disturbed sleep or appetite, low energy, and poor concentration" (WHO 2008). Sane (2008) ...read more.

There are a number of rating scales which enable a person's depression to be measured. One of the most widely used is the Beck Depression Inventory (Beck 1967). Beck believed that depression was associated with certain ways of thinking and perceiving the world. Within general practice a Patient Health Questionnaire (PHQ-9) is used as a tool for determining severity. (See appendix 1). The PHQ consists of 9 questions and depending on the patients overall score a grading system will determine whether the depression is mild, moderate or severe. It is equally important to rule out any physical cause for depression by performing certain blood tests. Anaemia, (a lack of iron in the blood) and Thyroid disorders (causes weight gain, loss, and tiredness) and can cause symptoms similar to depression. Management of depression The National Institute for Clinical Excellence (NICE) state that no drug treatment is recommended for mild depression as patients often recover without intervention but patients should be offered another assessment if they do not. (Healy, 2005) suggests that physical activity and structured routines along with a healthy diet, plenty of sleep may be enough to clear up the depression. ...read more.