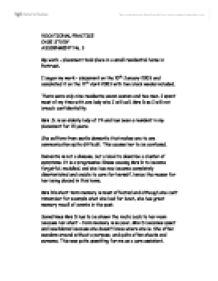 My work - placement took place in a small residential home in Portrush.

VOCATIONAL PRACTICE CASE STUDY ASSIGNMENT No. 3 My work - placement took place in a small residential home in Portrush. I began my work - placement on the 10th January 2003 and completed it on the 11th April 2003 with two block weeks included. There were only nine residents; seven women and two men. I spent most of my time with one lady who I will call, Mrs D so I will not breach confidentiality. Mrs .D. is an elderly lady of 74 and has been a resident in my placement for 15 years. She suffers from senile dementia that makes one to one communication quite difficult. This causes her to be confused. Dementia is not a disease, but a label to describe a cluster of symptoms. It is a progressive illness causing Mrs D to become forgetful, muddled, and she has now become completely disorientated and unable to care for herself, hence the reason for her being placed in this home. Mrs D's short term memory is most affected and although she can't remember for example what she had for lunch, she has great memory recall of events in the past. Sometimes Mrs D has to be shown the route back to her room because her short - term memory is so poor. ...read more.

Mrs D undergoes sympathetic, supportive nursing care in a homely environment, which offers her the best chance of maintaining what quality of life she has left. Although Mrs D suffers physically and mentally, she still merits consideration, kindness and respect as a human being, and this care is given to her in this residential home. When Mrs D entered the home, she was only suffering from mild confusion and was in the early stages of dementia. Now that this condition, along with her incontinence has deteriorated, she is unable to communicate her needs to the staff, but as her carers have seen this progression, they know her very well, and this doesn't cause a problem. Had Mrs D been admitted into the home with advanced dementia, it would have been difficult to provide the type of care she needed, mainly because the staff would not know her. When Mrs D entered the home she was able to tell her carers of her interests, how she liked to dress and style her hair. A written record was kept and now all staff can identify her wishes and can carry these out. Mrs D is capable of dressing and feeding herself, but still has physical, emotional and intellectual needs to be met. ...read more.

I had to be flexible, not get involved but I had to care for my own sake. Teamwork is vital. I was responsible along with the other care staff to treat Mrs D's pressure sores. One of the care staff assessed the sore and planned the treatment and care. This included changing Mrs D's position regularly. Mrs D's pressure sore was covered with a protective dressing to keep the wound clean. I enjoyed taking part in this clinical procedure. I enjoyed my work-placement and taking part in a clinical procedure made it that little bit more exciting and made me feel like one of the staff. I understood the importance of confidentiality was and abided by it as I knew it could destroy the relationship between the staff, the residents and I. The thing I liked best about work - placement was the fact that Mr. B (the owner) didn't make his staff wear a uniform as he felt it made the residents feel institutionalised. I only think that there was one area for improving while on my work - placement. I felt that the resident's were very bored during the day. They just slept. I feel that if they had something to keep them occupied this would not be the case. Other than that everything else was perfect. VOCATIONAL PRACTICE ASSIGNMENT NO. 3 CASE STUDY CLAIRE ~ LOUISE MCNEILL ...read more.