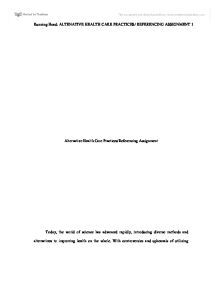 Alternative Health Care Practices/Referencing Assignment Today, the world of science has advanced rapidly, introducing diverse methods and alternatives to improving health on the whole. With controversies and upheavals of utilizing conventional allopathic medicine rising, many individuals have been turning to more natural and traditional ways to cure, sustain, and prolong their wellbeing. According to the Canadian Association of Naturopathic Doctors (2010), Naturopathic Medicine is a distinctive health care system which combines the contemporary scientific knowledge with natural and established forms of medicine. Naturopathy focuses on arousing the remedial power of the body while treating the primary cause of an illness. In addition, while determining the root cause of an illness, Naturopathy perceives the symptoms of an illness as warning signs of bodily dysfunction, as well as adverse standards of living (Canadian Association of Naturopathic Doctors, 2010). There are six major factors that form the foundation of naturopathy. First principle is "First Do No Harm". This principle signifies the importance of employing methods which are safe and effective, while optimizing one's health and minimizing negative side effects. The second principle is the "The Healing Power of Nature", which insinuates the concept of the body's innate ability to restore health. The third principle implies the necessity to "Identify and Treat the Cause"; naturopathy stresses that it is crucial to detect and treat the central cause of a health problem instead of focusing on its symptoms. ...read more.

Consequently, under such treatment, a naturopathic specialist uses eastern herbs and acupuncture in supporting the body to adjust its vital energy and attaining equilibrium. The procedure of Acupuncture involves the slot in of thin needles through the skin and tissue at precise points of the body. As there is no vaccination, there is minimum discomfort involved. Acupuncture has been extremely effective in treating acute and chronic illnesses; some disorders treated by acupuncture include digestive, respiratory, neurological, muscular, urinary, reproductive, substance abuse and sleep disorders (NaturoDoc, 2010). The prevalence of Naturopathic Medicine in our society has been escalating as people are acknowledging its short and long-term benefits. In accordance with such demand, the number of naturopathic doctors is mounting enormously. Presently, there are approximately 1,550 Naturopathic Doctors that practice naturopathy in every province and territory in Canada (Canadian Association of Naturopathic Doctors, 2010). In the discipline of natural and preventive remedy, naturopathic doctors are receiving greater appreciation as health care practitioners and as specialists. Naturopathic Medicine has been increasingly contributing in providing leadership in natural medical research and enhancing political sway. Nowadays, as more and more research supports the treatments employed by naturopathic doctors and with growing public demand regarding access to natural health care, naturopathic medicine is sure to enter the "mainstream" from an "alternative" form of health practice. ...read more.

Naturopathy has many benefits; from building homeostasis within the body to enhancing the immune system and following a holistic approach to treat health problems without utilizing any drugs, surgical procedures and causing side effects. I am in full support with Naturopathic practice due to the reason that I have actually benefited from it. As I am iron deficient, I was prescribed iron pills from my current family doctor. I repetitively aimed to take the pills but their side effects were unbearable; I would feel nauseated and worn-out all the time. I eventually contacted a Naturopathic Doctor who assisted me in acknowledging the main causes of my deficiency in iron. She not only stipulated me to take the natural iron supplements but also discussed my dietary patterns and additional activities which are encompassed in my life. Ever since I have started receiving naturopathic treatment, my iron level has gradually increased; I feel more active and energetic than I did before. Though there are some issues surrounding the effectiveness of naturopathy becoming the mainstream form of the medical care system, it is still capable and powerful in curing and preventing assorted illnesses. Hence, Naturopathic Medicine should be complimented with conventional medical care system and should continue to be practiced world-wide as it has proven to be valuable in many ways. ...read more.