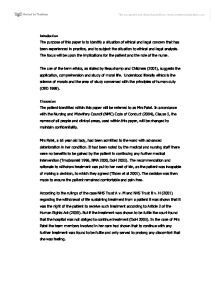 Introduction The purpose of this paper is to identify a situation of ethical and legal concern that has been experienced in practice, and to subject the situation to ethical and legal analysis. The focus will be upon the implications for the patient and the role of the nurse. The use of the term ethics, as stated by Beauchamp and Childress (2001), suggests the application, comprehension and study of moral life. Understood literally ethics is the science of morals and the area of study concerned with the principles of human duty (OED 1989). Discussion The patient identified within this paper will be referred to as Mrs Patel. In accordance with the Nursing and Midwifery Council (NMC) Code of Conduct (2004), Clause 5, the names of all people and clinical areas, used within this paper, will be changed to maintain confidentiality. Mrs Patel, a 65 year old lady, had been admitted to the ward with advanced deterioration in her condition. It had been noted by the medical and nursing staff there were no benefits to be gained by the patient in continuing any further medical intervention (Trnobranski 1996, BMA 2000, DoH 2005). ...read more.

But there was also the consideration towards acknowledging the stress that the family were in and facilitating their needs (Tilden et al 2001). From the perspective of the author the duty of the nurse is to maintain at all times that of beneficence and non-maleficence towards the patient. The conflict arose when the needs of the patient's family appeared to override the responsibilities of the nurse to the patient. Whilst the nurse involved appeared to consider the request of the patient's son she provided a rationale to show that the procedures being carried out were necessary and were for the benefit of the patient. It was felt by the author that the nurse may have helped the family further by searching to see if there was an underlying need behind the concerns expressed that the patient's son had not vocalised, such as; not wishing his mother to be given the pain killers due to the sedating effects upon her thereby possibly denying him the opportunity to communicate with her before she died. If one was to look at this situation from a deontological point of view one can see that the nurse was acting in a morally correct manner where the obligation was to ease the patient's pain and to maintain her comfort. ...read more.

Conclusion Reflecting upon the literature reviewed for this paper it has been shown repeatedly that every decision taken or action made by the nurse has ethical implications. From getting the patient out of their bed every morning at the same time as everyone else to administering medications and providing bedside care, all of these give rise to ethical questions and possible dilemmas. The subject matter of ethics, the use of analgesics within end of life care and the inclusion of the family/carers within the care of the patient are areas that have inspired this author to explore and study further beyond this paper. During the literature review it became obvious that the topic of end of life decision making was studied and written about to a great extent, which if chosen for the scenario for this paper would have made the task easier, whereas the literature available regarding the use of analgesia and the inclusion of families within end of life care was not as extensive. The inclusion of the family and carers is an area that has been included by the government and the NMC in many of the policies and papers yet seems strangely amiss in the articles searched for. The online search criteria used for this paper included OVID and Blackwell Synergy. ...read more.