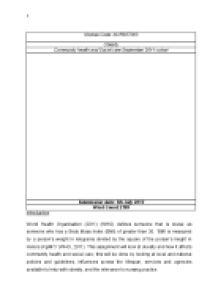 ﻿Module Code: NURS07003 Obesity Community health and Social care September 2011 cohort Submission date: 5th July 2012 Word Count:2199 Introduction World Health Organisation (2011) (WHO) defines someone that is obese as someone who has a Body Mass Index (BMI) of greater than 30. ?BMI is measured by a person?s weight in kilograms divided by the square of the person?s height in meters (Kg/M2)? (WHO, 2011). This assignment will look at obesity and how it affects community health and social care; this will be done by looking at local and national policies and guidelines, influences across the lifespan, services and agencies available to help with obesity, and the relevance to nursing practice. Policies and Guidelines (Local and National) The Scottish Government has set out a strategy to help prevent obesity; Healthy Eating, Active Living: An action plan to improve diet, increase physical activity and tackle obesity (2008-2011) is a strategy that aims to explain how the Scottish Government will improve Scotland?s diet, and encourage greater exercise in order to establish a base to tackle obesity, and support people to achieve and maintain a healthy weight are targeted mainly towards those at greatest risk of health inequalities (Scottish Government, 2008). A main objective of the strategy is to improve and maintain natural and built environments to encourage a more active lifestyle, providing opportunities for activities like walking, cycling, and swimming with the aim of preventing obesity in Scotland. (Scottish Government, 2008) with in the strategy it also states it aims to ?Promote healthy food choices, meal preparation and eating habits by communicating practical achievable steps towards the consumption of a healthier diet.? (Scottish Government, 2008 p.19). ...read more.