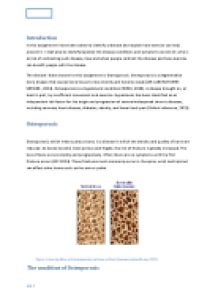 Osteoporosis, which means porous bone, is a disease in which the density and quality of bone are reduced.

﻿Introduction In this assignment I have been asked to identify a disease and explain how exercise can help prevent it. I shall also be identifying what the disease conditions and symptoms consist of, who is at risk of contracting such disease, how and when people contract the disease and how exercise can benefit people with the disease. The disease I have chosen for this assignment is Osteoporosis. Osteoporosis is a degenerative bone disease that causes bone tissue to lose density and become weak (LES LABORATOIRES SERVIER., 2013). Osteoporosis is a hypokinetic condition (WWU, 2010). A disease brought on, at least in part, by insufficient movement and exercise. Hypokinesis has been identified as an independent risk factor for the origin and progression of several widespread chronic diseases, including coronary heart disease, diabetes, obesity, and lower back pain (Oxford reference, 2011). Osteoporosis Osteoporosis, which means porous bone, is a disease in which the density and quality of bone are reduced. As bones become more porous and fragile, the risk of fracture is greatly increased. The loss of bone occurs silently and progressively. Often there are no symptoms until the first fracture occurs (IOF 2013). These fractures most commonly occur in the spine, wrist and hips but can affect other bones such as the arm or pelvis. Figure 1 showing Bone with osteoporosis and bone without (menopausehealth.org, 2007) ...read more.

The Secondary risk factors are: Alcohol, smoking, low body mass, poor nutrition, vitamin D deficiency, eating disorders, lack of exercise, low dietary calcium intake and frequent falls. Osteoporosis and Gender There are studies suggesting that men and women are more likely to contract osteoporosis under certain circumstances. The recent study by Dennison et al (2007) has concluded that later stages of bone deterioration associated with osteoporosis are more conclusive in men with poor lifestyles. Dennison et al conducted a study where 498 men and 468 women from the Hertfordshire Cohort Study attended a research clinic where a lifestyle questionnaire was administered, body measurements taken and x-ray performed at the neck and lumbar spine. The study found that men with unhealthy lifestyles would be more likely to develop osteoporosis. Also in a recent study it was said that there is a direct relationship between the lack of estrogen after menopause and the development of osteoporosis. After menopause, the breakdown of bone outpaces the building of new bone. Early menopause and any prolonged periods in which hormone levels are low and menstrual periods are absent or infrequent can cause loss of bone mass (Van Der Kamp, 2012). Osteoporosis and Race Race is also a factor when processing someone?s risk of having Osteoporosis. Many studies show that black women lose bone mass more slowly than white or Asian women. ...read more.

It was concluded that a lack of weight-bearing activity causes skeletal loss. The authors suggested that the compressive and the impact of forces applied may not have simulated normal ambulation adequately in terms of quality and quantity (Aisenbrey, 1987). This suggests that inactivity can lead to weak bones and frequent weight bearing exercise is needed to keep bones strong. What benefits would exercise bring to the person and their condition. Exercise would benefit older women Van Der Kamp (2012) states that postmenopausal women with osteoporosis should be treated with pain relief and physiotherapy plan consisting of biomechanical movement and light exercise. Compliance with exercise regimens is a very important factor in trying to increase bone mass density. The evidence for exercise having a protective role against hip fracture comes from large epidemiological studies conducted by the IFO (IFO, 2013). In general, it is thought that disuse (not using the limbs or prolonged periods of inactivity) and unloading of the skeleton promotes reduced bone mass, whereas loading promotes increased bone mass. The effects of mechanical loading have been demonstrated in athletes undertaking high-impact exercise. Mechanical loading through exercise has the potential to be a safe and effective way to avert or delay the onset of osteoporosis in postmenopausal women. The IFO concluded that exercise has beneficial effects on bone density of the hip and spine, although long term-studies including fracture data are rare. In addition, strength and balance exercises contribute to fracture risk reduction through their efficacy in reducing falls risk (Kemmlar et al 2013). ...read more.