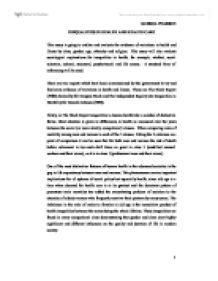 Outline and evaluate the evidence of variations in health and illness by class, gender, age, ethnicity and religion

This essay is going to outline and evaluate the evidence of variations in health and illness by class, gender, age, ethnicity and religion. This essay will also evaluate sociological explanations for inequalities in health, for example, artefact, social selection, cultural, structural, psycho/social and life course. A standard form of referencing will be used. There are two reports which have been commissioned by the government to try and find some evidence of variations in health and illness. These are The Black Report (1980) chaired by Sir Douglas Black and The Independent Inquiry into Inequalities in Health by Sir Donald Acheson (1998). Firstly, in The Black Report inequalities in human health take a number of distinctive forms. Most attention is given to differences in health as measured over the years between the social (or more strictly occupational) classes. When comparing rates of mortality among men and women in each of the 5 classes. Taking the 2 extremes as a point of comparison it can be seen that for both men and women the risk of death before retirement is two-and-a-half times as great in class 5 (unskilled manua1 workers and their wives), as it is in class 1 (professional men and their wives). One of the most distinctive features of human health in the advanced societies is the gap in life expectancy between men and women. This phenomenon carries important implications for all spheres of social policy but especially health, since old age is a time when demand for health care is at its greatest and the dominant pattern of premature male mortality has added the exacerbating problem of isolation to the situation of elderly women who frequently survive their partners by many years. ...read more.

Among women, it has been found that those in classes 4 and 5 are much less likely to be screened for cervical cancers even though mortality from this condition is much higher in these classes than in the non-manual classes. In the Acheson report, the findings were much the same as The Black Report. The Acheson Report has also shown that health was improving but more for the higher than lower social classes. Premature mortality, that is death before age 65, is higher among people who are unskilled. If all men in this age group had the same death rates as those in classes I and II, it is estimated that there would have been over 17,000 fewer deaths each year from 1991 to 1993. Deaths from accidents and suicide occur at relatively young ages and each contribute nearly as much to overall years of working life lost as coronary heart disease. Death rates from all three causes are higher among those in the lower social classes, and markedly so among those in class V (Office for National Statistics and Blane & Drever 1998). In adulthood, being overweight is a measure of possible ill health, with obesity a risk factor for many chronic diseases. There is a marked social class gradient in obesity which is greater among women than among men. (Colhoun and Prescott-Clarke, 1996), (Prescott-Clarke and Primatesta 1997), (Prescott-Clarke and Primatesta 1998). In 1996, 25 per cent of women in class V were classified as obese compared to 14 per cent of women in class I. Another indicator of poor health is raised blood pressure. There is a clear social class differential among women, with those in higher classes being less likely than those in the manual classes to have hypertension. ...read more.

Self efficacy is linked to self esteem, self concept, social support and individuals coping style. In other words, the psycho-social approach forges a link between class position and vulnerability to social stresses. Wilkinson et al (1990) discuss a social cohesion approach and argue that social and power inequalities (i.e. authoritarian hierarchies and non democratic social organisations, and potential status inequalities such as gender and ethnicity) will affect the quality of social relationships. Where inequalities produce anger, frustration, fear insecurity and negative emotion, social relations will suffer. Better health is linked to better social relations, through trust, more security, more social support, more self esteem, self respect, a sense of belonging and less financial and material disadvantage. Thus democratic and participatory styles of social organisation - from the family to political organisations - have a health enhancing effect. A life course theory regards health as reflecting the patterns of social, psychological and biological advantages and disadvantages experienced by the individual over time. A life course theory of health inequality regards these patterns as being profoundly affected by the position of individuals and families in social and economic structures and hierarchies of status. However, these links themselves depend on the political and cultural environment, which means that there is a need for a life course political economy of health, which examines the ways in which economic and social policies influence the accumulation of material and psycho social risk. The ways in which advantages and disadvantages combine over the life course influence both how long each individual may spend in good health, and also what form of illness they may acquire. In conclusion, there are many inequalities in health and all the findings from The Black Report in 1980 are still around today, which was shown in The Acheson Report. ...read more.