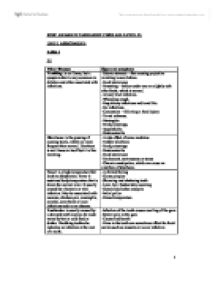 BTEC AWARD IN PAEDIATRIC FIRST AID (LEVEL 2): UNIT 1 ASSIGNMENT: TASK 1 1.1 Minor illnesses Signs and symptoms Vomiting: is an illness, but a symptom that is very common in children and often associated with infections. -Pylonic stenosis - that causing projective vomiting in new babies. -Food intolerance -Possetting - babies under one are slightly sick after feeds, which is normal. -Urinary tract infection. -Whooping cough. -Respiratory infections and tonsillitis. -Ear infections. -Concussion - following a head injury. -Travel sickness. -Meningitis -Food poisonings. -Appendicitis. -Gastroenteritis Diarrhoea: is the passing of running stools, which are more frequent than normal. Diarrhoea is not illness in itself but it is like vomiting. -A side effect of some medicine -Toddler diarrhoea -Food poisonings -Gastroenteritis -Food intolerance -Excitement, nervousness or stress -Chronic constipation, which can cause an overflow of diarrhoea. Fever: is a high temperature that leads to dehydration. Fever is sustained body temperature that is above the normal level. It usually caused by a bacteria or vital infection. May be associated with measles, chicken pox, meningitis, earache, sore throat or local infections such as an abscess. -A chilled feeling -Goose pimples -Shivering and chattering teeth -Later, hot, flushed skin sweating -Generalised aches and pain -Initial pallor -Raised temperature. Toothache: is usually caused by a decayed tooth and can be made worse by hot or cold food or drinks. Throbbing toothache indicates an infection at the root of a tooth. -Infection of the tooth causes swelling of the gum -Severe pain in the gum -Causes bad breath -Pains in the teeth can sometimes affect the facial nerves such as sinusitis or an ear infection. 1.2 Application of first aid to each and reasons; Toothache: * Reassured the child * To put on gloves * Make the child comfortable because the child lying down makes the toothache worse * To prop the child up with pillows * Recommended dose of paracetamol syrup should be given * To give the child hot-water bottle wrapped in a towel to hold ...read more.

TASK 3 3.1 (A) - Asthma: Asthma is an attack of the muscles that air passages in the lungs go into spasm and the lining of the airways swell, and becomes very narrowed; this makes breathing very difficult and eventually trigger for attack. Asthma is potentially fatal and should always be taken seriously. It is caused by a narrowing and swelling of the airways and increased mucous production which is due to body response to an allergy or virus which are called 'triggers'. Example of these may include the following; * Lack of oxygen * Animal furs (most especially cats) * Anxiety * Respiratory infections * Some food items * Air pollution house dust mite * Cold air * Pollen * Exercise * Tobacco smoke Signs and Symptoms of Asthma; -Coughing at night -Recurrent cough in the cod or after exercise -Fast breathing -Wheezing when the child breathes out exhales -Trembling -The lip are blue because their lack of oxygen -Tightness of the chest -During the attack there may be; * Difficulty in speaking * Fear * Dry tickly cough * Grey-blue colour to the skin. Medication for Asthma: -Inhaler -Bronchodilator' drug, which are called (reliever) -Ventolen (Salbutamol), which can be given as tablets, syrup form of inhaler. -Preventer such as (intal), or a steroid such as 'Becotide'. -There are children under 5years old; who have difficulty in using inhaler might use a spacer device, such as Nebuliser. -Children over 6 might also use a peak flow meter, through which the child blows regularly - To records the results on a chart (B) -Sickle Cell Crisis: Sickle cell disease is a disorder of red blood cells, which is inherited. Some children were born with disease while other may be born with a sickle cell 'trait', which mean they are carriers of the condition. Sickle cell trait children are perfectly healthy children. Sickle cell children are more common in children of some ethnic backgrounds particularly those from Afro-Caribbean origin. ...read more.

Source of information: Search Engine - Google Search; Website Address; www.hse.gov.uk/coshh http://www.hse.gov.uk/firstaid/legislation.htm http://www.hse.gov.uk/firstaid/fags.htm 1.2 Why is it important to carry out the legislation? It is a legal requirement or every employer to carry these Health and Safety (First Aid) Regulation 1981, in order to provide and maintain good working/studying conditions and safety environment for the employees, non-employees and the children in the setting. Failure to comply with these regulations may result in prosecution of any identified company or institutes by the Health and Safety Executives (HSE). If found guilty of any misconduct or not maintaining both the required quality and level of hygiene and first aid standard stipulated by the law, the company or institution in this regard may be liable for heavy financial liability or in the extreme case, the company or the institution may be closed down. 1.3 See copy of the legislation in portfolio: TASK 2 2.1 The full contents of a first aid box (children): * Disposable plastic gloves * Crepe bandages, open weave * Small conforming bandage * Large conforming bandage * Large roller bandage * Clips to secure bandages * 2 eye-pads with bandage * Hypo-allergenic plasters * Tweezers * Scissors * Non-stick sterile dressings * Gauze swabs * 2 triangular bandages * Cotton wool * Cardboard tags * Pocket mask * Blanket, touch and whistle * Face shield * Cleansing wipes - Alcohol-free * Survival bags. 2.2 Action for the missing items in the first aid box: If I found out that one or more items were missing or the contents of the first aid box were incomplete, I will report this to the appointed person (that is, the First Aider). And make sure that these missing items have to be replaced immediately. The reason for taking this action, is that accident do happen or occur in the setting any time, most especially during playtime of which it might be one of these missing items that be needed for administering the required first aid. ?? ?? ?? ?? 1 ...read more.