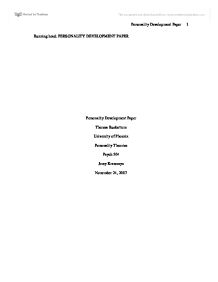 Personality Development Paper. Physical therapists and health care providers from other disciplines bring their own cultures (and, unfortunately, biases) to each clinical encounter.

Running head: PERSONALITY DEVELOPMENT PAPER Personality Development Paper Theresa Ruebottom University of Phoenix Personality Theories Psych 504 Jorey Krawczyn November 24, 2007 Personality Development Paper Culture refers to the behavior, patterns, beliefs, and all other products of a group of people that are passed on from generation to generation. It results from the interaction between people and their environment over many years. Culture also pertains to the language, values, and customs. "No matter how well intentioned people are, their life circumstances likely have given them some prejudices. If they don't have prejudices toward people with different cultural and ethnic backgrounds, other kinds of people may bring out prejudices in them. For example, prejudices can be developed about people who have certain religious or political conventions, people who are unattractive or too attractive, people with a disability, and people in a nearby town (Santrock, 2007)." Culture is one aspect of our experience that makes us similar to some people and different from others. ...read more.

Americans do not have formal rites of passage that mark the transition from adolescence to adulthood. For the United States school graduation is the closest there is to rites of passage. For communication in culture it involves change, and nowhere is that change greater than in the technological revolution, today's children and youth are experiencing with increased use of computers and the Internet. Society still relies on some basic nontechnological competencies: for example, good communication skills, positive attitudes, and the ability to solve problems, and to think deeply and creatively. However, how people pursue these competencies is changing in ways and at a speed that few people had to cope with in previous eras (Bitter & Legacy, 2006; Thorsen, 2006; Wood & Smith, 2006). People are using computers to communicate today the way they used to use pens, postage stamps, and telephones. For children to be adequately prepared for tomorrow's jobs, technology needs to become an integral part of their lives (Saettler, 2005). ...read more.

These objectives imply active participation of both the therapist and the client; therefore, the cultural values and beliefs of the client need to be taken into consideration for successful assessment and treatment. Other cultures also have unique values and lifestyle characteristics that need to be known and understood by physical therapists and other healthcare providers to promote the delivery of culturally competent care. Culture also affects health service utilization patterns and clients' expectations as well as satisfaction with services. But make no bones about it-culture in patient-provider interactions is a two way street. Physical therapists and health care providers from other disciplines bring their own cultures (and, unfortunately, biases) to each clinical encounter. The number of physical therapists who are members of racial and ethnic minority groups has been steadily on the rise, and the APTA has been at the forefront of addressing cultural diversity issues, including minority student recruitment and retention (Ries, 2006). ...read more.