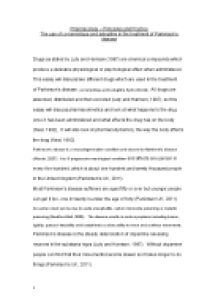 Pharmacology. The use of co-beneldopa and selegiline in the treatment of Parkinsons disease

﻿Pharmacology ? Principles and Practice The use of co-beneldopa and selegiline in the treatment of Parkinson?s disease Drugs as stated by Luty and Harrison (1997) are chemical compounds which produce a desirable physiological or psychological effect when administered. This essay will discuss two different drugs which are used in the treatment of Parkinson?s disease, co-beneldopa and selegiline hydrochloride. All drugs are absorbed, distributed and then excreted (Luty and Harrison, 1997), so this essay will discuss pharmacokinetics and look at what happens to the drug once it has been administered and what effects the drug has on the body (Neal, 1992), It will also look at pharmacodynamics, the way the body affects the drug (Neal, 1992). Parkinson's disease is a neurodegenerative condition and second to Alzheimer's disease (Allcock, 2007). It is a progressive neurological condition and affects one person in every five hundred, which is about one hundred and twenty thousand people in the United Kingdom (Parkinson?s UK, 2011). Most Parkinson's disease sufferers are aged fifty or over but younger people can get it too, one in twenty is under the age of forty (Parkinson UK, 2011). An earlier onset can be due to acute encephalitis, carbon monoxide poisoning or metallic poisoning (Beckford-Bell, 2006). The disease results in motor symptoms including tremor, rigidity, postural instability and bradykinesia a slow ability to move and continue movements. Parkinson?s disease is the steady deterioration of dopamine releasing neurons in the substania nigra (Luty and Harrison, 1997). Without dopamine people can find that their movements become slower so it takes longer to do things (Parkinson?s UK, 2011). Parkinson?s disease process develops as the cells in the Substantia nigra, the crescent shaped cell mass in the brain stem are destroyed (ADAM, 2011). Parkinson?s disease affects movement, muscle control, and balance. Nerve cells in the substantia nigra send out fibres to tissue located in both sides of the brain. There the cells release essential dopamine neurotransmitters that help control movement and coordination (ADAM, 2011). ...read more.

It is not yet known ?if the lack of amphetamine metabolites with rasagiline confers any clinical benefit over selegiline. These agents are effective for reducing motor symptoms in Parkinson?s disease, and can delay the need for treatment with levodopa? (Allcock, 2007). The pharmacokinetics of selegiline are highly variable. After the administration of an oral dose of selegiline, it is rapidly absorbed and metabolised to desmethylselegiline, levoamphetamine and levomethamphetamine (Selegiline data sheet, 2011). This metabolism is mainly in the liver (Delue et al, 2002). It is distributed into tissues including the brain. The drug is highly lipid-soluble, which is why it rapidly penetrates the central nervous system (Delue et al, 2002). Plasma protein binding is ninety nine point five percent (Drug bank, 2011). The absolute bioavailability of selegiline is approximately 10% (Medafe, 2000). Which means a lot of the drug is wasted before it reaches the systemic circulation. Selegiline bioavailability can be substantially increased however by up to threefold if it is administered with food high in fat (Medsafe, 2000 and Drugs.com, 2011). Selegiline is mainly excreted as metabolites in the urine, about fifteen percent is excreted in the faeces. The half life of selegiline is between one to two hours (Drug bank, 2011) or about ten hours (Medsafe, 2000). Selegiline?s benefits in Parkinson's disease has only been recorded as an addition to levodopa. Drug.com (2011) documented selegiline?s effectiveness as a monotherapy was unknown, but past attempts to treat Parkinson's disease with non-selective monamine oxidase inhibitors as a sole treatment are reported to have been unsuccessful. However, Heinonen and Myllyla (1998) stated in all studies where selegiline has been used as monotherapy in the treatment of Parkinson?s disease the drug has been well tolerated if it is compared with, for example, dopamine agonists. Attempts to treat Parkinson?s disease with combinations of levodopa and currently marketed non-selective monamine oxidase inhibitors were stopped because of multiple side effects including hypertension, increase in involuntary movement, and toxic delirium (Drugs.com, 2011). ...read more.