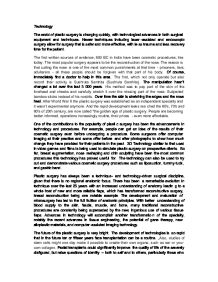 Plastic surgery report. One of the contributions to the popularity of plastic surgery has been the advancements in technology and procedures.

The world of plastic surgery is changing quickly, with technological advances in both surgical equipment and techniques. Newer techniques including laser-assisted and endoscopic surgery allow for surgery that is safer and more effective, with less trauma and less recovery time for the patient.

The first written sources of evidence, 600 BC in India have been cosmetic procedures, like today. The most popular surgery appears to be the reconstruction of the nose. The reason is that cutting the nose is one of the most common punishments at that time - prisoners, liars, adulterers - all these people should be forgiven with that part of his body. Of course, immediately find a doctor to help in this area. The first, which not only operate but also record their activity is Sushruta Samhita (Sushruta Samhita). The manipulation hasn’t changed a lot over the last 3 000 years. His method was to pay part of the skin of the forehead and cheeks and carefully stretch it over the missing part of the nose. Subjected bamboo sticks instead of his nostrils. Over time the skin is stretching the edges and the nose heal. After World War II the plastic surgery was established as an independent specialty and it wasn’t experimental anymore. And the rapid development leeks reached the 60's, 70's and 80's of 20th century, are now called "the golden age of plastic surgery. People are becoming better informed, operations increasingly routine, their prices - even more affordable.

One of the contributions to the popularity of plastic surgery has been the advancements in technology and procedures. For example, people can get an idea of the results of their cosmetic surgery even before undergoing a procedure. Some surgeons offer computer imaging at their practice and some offer before and after photographs to show how much change they have provided for their patients in the past. 3D Technology similar to that used in video games and films is being used to simulate plastic surgery on prospective clients. So far, breast augmentation, nose reshaping and chin sculpting have been the most common procedures this technology has proved useful for.  The technology can also be used to try out and demonstrate various cosmetic surgery procedures such as liposuction, tummy tuck, and gastric band.

Plastic surgery has always been a technique- and technology-driven surgical discipline, given that there is no regional anatomic focus. There has been a remarkable evolution in technique over the last 25 years with an increased understanding of anatomy leading to a whole host of new and more reliable flaps, which has transformed reconstructive surgery, breast reconstruction being one notable example. The development and maturation of microsurgery has led to the full fruition of anatomic principles. With better understanding of blood supply to the skin, fascia, muscle, and bone, many traditional reconstructive procedures are constantly being superseded by the new, ingenious use of various tissue flaps. Advances in technology will accomplish another transformation of the specialty, notably the recent advances in tissue engineering, the potential of gene therapy, new alloplastic materials, and computer-assisted imaging technology.

The future of the plastic surgery is very bright. The development of technologies is so rapid that in the future ten or fifteen years face transplantation can be a routine.Also, studies of stem cells might one day make it possible to create their own organs, such as ear or your own collagen. Facial transplants could significantly improve the quality of life of the severely disfigured, but raise questions of identity -- both to self and to others, particularly those who knew the deceased donor. Patient selection, cost, and reimbursement are other potential issues. Candidates should undergo intensive psychological screening to eliminate those with behaviours that may decrease graft viability. Presumed consent, supported by many for other organ donations given the current long waiting lists, will likely not be acceptable for face donation for obvious reasons. Beauty salons in Russia have been offering stem-cell cosmetic surgery where fetal, embryonic, or adult stem cells are injected as treatment for baldness and wrinkles. The efficacy and safety of such procedures are dubious at best. There have been reports of the use of stem cells obtained from the aborted fetuses of poor women who are paid about $200 to undergo late-term cesarean abortions. The fetus is then traded and sold on the black market.