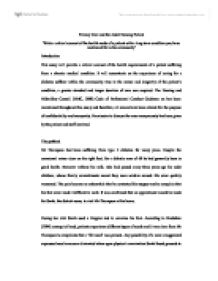 Primary Care and the Adult Nursing Patient 'Write a critical account of the health needs of a patient with a long term condition you have met/cared for in the community' Introduction This essay will provide a critical account of the health requirements of a patient suffering from a chronic medical condition. It will concentrate on the experience of caring for a diabetes sufferer within the community. Due to the nature and longevity of the patient's condition, a greater standard and longer duration of care was required. The Nursing and Midwifery Council (NMC, 2008) Code of Professional Conduct Guidance on has been maintained throughout this essay and therefore, all names have been altered for the purpose of confidentiality and anonymity. Permission to discuss the case anonymously has been given by the patient and staff involved. The patient. Mr Thompson had been suffering from type 2 diabetes for many years. Despite the occasional minor ulcer on his right foot, for a diabetic man of 69 he had generally been in good health. However without his wife, who had passed away three years ago his adult children, whose family commitments meant they were seldom around. His ulcer quickly worsened. The pain became so unbearable that he contacted his surgery and to complain that his foot ulcer made it difficult to walk. It was confirmed that an appointment would be made for Sarah, the district nurse, to visit Mr Thompson at his home. During her visit Sarah used a Doppler test to examine his foot. According to Bradshaw (1994) concept of need, patients experience different types of needs and it was clear from Mr Thompson's complaints that a 'felt need' was present. Any possibility of a mere exaggerated expressed need was soon eliminated when upon physical examination Sarah found grounds to diagnose the matter as serious. Evidently both normative and comparative needs applied in Mr Thompson's case-as he was experiencing a higher level of suffering than would normally be expected of a diabetic sufferer. ...read more.

Reports suggest they have been considerably successful at regaining patients' independence. Often, particularly with older diabetics, conditions greatly limit their ability to perform mundane tasks, hindering their quality of life (DoH, 2007). However negligence, as in the case for Mr Thompson meant that he was eventually forced to revert back to the primary care of the hospital, where he underwent an extensive array of medical procedures. The surgeon drained and debride his infected feet, grafted skin over large defects, performed vascular bypasses and amputated unsalvageable limbs. Interventional radiologist x rayed Mr Thompson's foot interpreted the X-rays and performs angiography and angioplasty. Clearly extreme measures were also taken by staff to promote self care by ensuring he was well educated about prevention. According to Foster A, Edmonds M (2001) The Orthotist would provide suitable footwear and foot care advice, the nurse cleansed and dressed his wounds and further advised on wound care, the podiatrist performed neurological and vascular assessments and acted as the patient's advocate. Although great measures were being taken to prevent Mr Thompson's condition from worsening such a lengthy and traumatic ordeal could have been avoided had he been properly monitored and reviewed whilst living independently. His hospitalisation had defeated the key government objective. However with increasing medical knowledge it is becoming easier to take preventative measures, such as targeting high risk groups. Even with medical advancements and increased life expectancy, Diabetes remains the world's 5th leading cause of death and the number of sufferers is said to be increasing. The health profile of Medway shows no significant difference compare to England average. It is probable that improved preventative measures should be developed. For instance whilst the overall population of Medway and Kent is predominately white, some parts of the county (particularly in the north) are more ethnically diverse. Therefore hospitals should apply policies which reflect these ethnic variations across the county. Understanding such differences enables healthcare and health promotion messages to be targeted in appropriate ways (Kent and Medway public health observatory NHS 2008). ...read more.