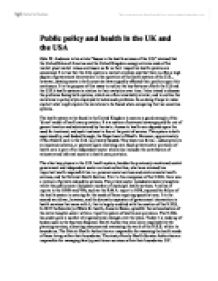 Public policy and health in the UK and the USA

Public policy and health in the UK and the USA Odin W. Anderson in his article "Issues in the health services of the U.S." claimed that the United States of America and the United Kingdom occupy extreme ends of the market plus/ market minus continuum as far as their respective health systems are concerned. It is true that the U.S. system is market oriented, and that there is often a high degree of government intervention in the operation of the health system of the U.K., however, developments in both countries have arguably effected their position upon this continuum. It is the purpose of this essay to outline the key features of both the U.S and the U.K.'s health systems in relation to their evolution over time. I also intend to discuss the problems facing both systems, which are often remarkably similar, and to outline the variations in policy style employed to tackle such problems. In so doing I hope to make explicit what might explain the variations to be found when comparing the two countries systems. The health system to be found in the United Kingdom is seen as a good example of the `direct' model of health care provision. It is a system of universal coverage paid for out of general taxation and administered by the state. ...read more.

For instance, the increased burden of chronic illness, the increased importance of new infectious diseases, the growth of the elderly population , and the persistence of variations in health status according to social class, geographical location, gender and ethnicity. Such trends have ramifications for all aspects of health policy. Other common problem areas include the obvious need to control costs. This problem was most obvious in the American system during the late '60's/ early '70's. Attempts to control expenditure took several forms indicating the complexity of the problem given that no one method appeared to be sufficient. In 1989 American health care provision cost �1300 per head, whereas this figure was as low as �550 in places such as the U.K. There is also the common need to monitor efficiency and accountability. In the U.K., bearing in mind the structure of the N.H.S., this problem largely centres around the overlap, duplication and lack of co ordination between its various components. There is also a fundamental contradiction at the heart of the N.H.S. in that the Secretary of State for health has full responsibility for health policy, but has little direct control over the activities of the N.H.S.. The health system in the U.S. suffers from the fact that there has been little overall planning, and this has arguably hampered co ordination and efficiency, as well as any attempts to attain universality and equity of health care provision. ...read more.

re organisation of 1974 created three tiers of health service management at regional, area and district level. However, this re organisation did not solve the structural problems inherent in the service as there still remained three separate agencies involved in the provision of state health care. However, the policy makers continued to place their faith in structural reform, giving rise to further re organisation in 1982. Policy making here differs from that of the U.S. in that the problem is seen to be inherent in the structure of the N.H.S., resulting in structural reform. In the U.S. more piecemeal, less general reform is used, and there appears to be no overall planning strategy, largely due to a dislike of mandated direction in the American political culture. In conclusion, it would appear that the challenges facing the two countries health systems are often very similar. For instance, the need to combat upcoming health trends or the goal of universal access. However, the methods used to combat such challenges are often very different, with the Americans invariably focussing on market led provision, whilst Britain has a strong tradition of government intervention in this area. This can often be put down to political culture and the importance placed on health systems within the two countries. There is a sense in which things have changed, however. For example, the Thatcher years saw a move towards the American market led approach in health care, whereas a more comprehensive policy approach has recently emerged in U.S. health policy. ...read more.