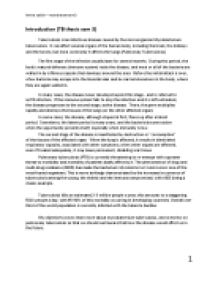 ﻿Amira saidin ? manchestersem3 Introduction (TB thesis sem 3) Tuberculosis is an infectious disease caused by the microorganism Mycobacterium tuberculosis. It can affect several organs of the human body, including the brain, the kidneys and the bones; but most commonly it affects the lungs (Pulmonary Tuberculosis). The first stage of the infection usually lasts for several months. During this period, the body's natural defenses (immune system) resist the disease, and most or all of the bacteria are walled in by a fibrous capsule that develops around the area. Before the initial attack is over, a few bacteria may escape into the bloodstream and be carried elsewhere in the body, where they are again walled in. In many cases, the disease never develops beyond this stage - and is referred to as TB infection. If the immune system fails to stop the infection and it is left untreated, the disease progresses to the second stage, active disease. There, the germ multiplies rapidly and destroys the tissues of the lungs (or the other affected organ). In some cases, the disease, although stoped at first, flares up after a latent period. Sometimes, the latent period is many years, and the bacteria become active when the opportunity presents itself, especially when immunity is low. The second stage of the disease is manifested by destruction or "consumption" of the tissues of the affected organ. When the lung is affected, it results in diminished respiratory capacity, associated with other symptoms; when other organs are affected, even if treated adequately, it may leave permanent, disabling scar tissue. Pulmonary tuberculosis (PTB) is currently threatening to re-emerge with a greater threat to morbidity and mortality of patients badly affect by it. The phenomenon of drug and multi-drug resistance (MDR) has made the bacterium Mycobacterium tuberculosis one of the most feared organisms. This is more strikingly demonstrated by the increased occurrence of tuberculosis among the young, the elderly and the immunocompromised, with AIDS being a classic example. ...read more.

4. Granulomatous endometritis, high power microscopic. 5. Ziehl-Neelsen acid fast stain, microscopic, AFB stain. 6. Auramine stain, M. tuberculosis, fluorescence microscopy. 4.5 Physical Primary tuberculosis is characterized by the absence of any signs on clinical evaluation. These patients are identified by a positive TST result. Tuberculin hypersensitivity may be associated with erythema nodosum and phlyctenular conjunctivitis. Signs of disease depend on the site involved (pulmonary or extrapulmonary). Pulmonary disease may manifest itself in several forms, including endobronchial tuberculosis with focal lymphadenopathy, progressive pulmonary disease, pleural involvement, and reactivated pulmonary disease. Endobronchial disease: Enlargement of lymph nodes may result in signs suggestive of bronchial obstruction or hemidiaphragmatic paralysis. Vocal cord paralysis may occur as a result of local nerve compression. Dysphagia due to esophageal compression also may be observed.[12][14] Progressive primary pulmonary tuberculosis: This condition presents with classic signs of pneumonia, including tachypnea, nasal flaring, grunting, dullness to percussion, egophony, decreased breath sounds, and crackles. Pleural effusion: Signs include tachypnea, respiratory distress, dullness to percussion, decreased breath sounds, and, occasionally, features of mediastinal shift. 1. Pulmonary Tuberculosis Types Pulmonary Tuberculosis types are Primary Tuberculosis Pneumonia, Tuberculosis Pleurisy, Cavitary Tuberculosis, Miliary TB, Laryngeal Tuberculosis[12] 5.1 Primary Tuberculosis Pneumonia This uncommon type of TB presents as pneumonia and is very infectious. Patients have a high fever and productive cough. It occurs most often in extremely young children and the elderly. It is also seen in patients with immunosuppression, such as HIV-infected and AIDS patients, and in patients on long term corticosteroid therapy. 5.2 Tuberculosis Pleurisy This usually develops soon after initial infection. A granuloma located at the edge of the lung ruptures into the pleural space, the space between the lungs and the chest wall. Usually, a couple of tablespoons of fluid can be found in the pleural space. Once the bacteria invade the space, the amount of fluid increases dramatically and compresses the lung, causing shortness of breath (dyspnea) ...read more.

TB is not caused by perspiration drying on one?s back, by over-exertion or fatigue TB is not caused by smoking or pollution, although these clearly damage the lungs. TB is not caused by poor nutrition, although this could make a person who inhales a TB bacterium more likely to develop TB disease. TB is not transmitted through food or drinks or using other utensils. TB is acquired through exposure to someone sick with active TB of the lungs. Mild symptoms of primary pulmonary tuberculosis and brief, often no obvious signs, many patients were unknowingly spent, and showed that PPD. TB prevention and control takes two parallel approaches. In the first, people with TB and their contacts are identified and then treated. Identification of infections often involves testing high-risk groups for TB. In the second approach, children are vaccinated to protect them from TB. No vaccine is available that provides reliable protection for adults. However, in tropical areas where the levels of other species of mycobacteria are high, exposure to nontuberculous mycobacteria gives some protection against TB. Since humans are the only host of Mycobacterium tuberculosis, eradication would be possible. This goal would be helped greatly by an effective vaccine. Treatment for TB uses antibiotics to kill the bacteria. Effective TB treatment is difficult, due to the unusual structure and chemical composition of the mycobacterial cell wall, which makes many antibiotics ineffective and hinders the entry of drugs. Progression from TB infection to TB disease occurs when the TB bacilli overcome the immune system defenses and begin to multiply. In primary TB disease?1?5% of cases?this occurs soon after infection. However, in the majority of cases, a latent infection occurs that has no obvious symptoms. These dormant bacilli can produce tuberculosis in 2?23% of these latent cases, often many years after infection. The risk of reactivation increases with immunosuppression, such as that caused by infection with HIV. In patients co-infected with M. tuberculosis and HIV, the risk of reactivation increases to 10% per year. ...read more.