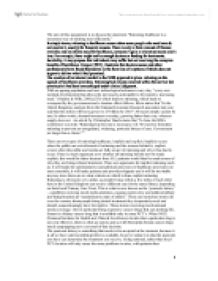 The aim of this assignment is to discuss the statement “Rationing healthcare is a necessary way of meeting need efficiently.”

In simple terms, rationing in healthcare occurs when some people who need care do not receive it, usually for financial reasons. There is only a finite amount of finance available and an infinite need for healthcare; someone’s gain is always someone else’s loss. For example, there might not be enough doctors or funding for treatments. Inevitably, it may propose that individuals may suffer but not receiving the complete benefits of healthcare. Cooper (1975), illustrates that doctors nurses and other professionals have found themselves in the front line of a system of which does not appear to deliver what it had promised.

The creation of an internal market in the NHS appeared to place rationing on the agenda of healthcare providers. Rationinghad always occurred within the service but previously it hadbeen camouflaged under clinical judgment.

With an ageing population and new technological advances every day, “every new medical development that allows the previously untreatable to be treated is increasing need.” (Naidoo & Wills, 2001 p233) which leads to rationing, which leads to overspend by the government and a domino effect follows. Klein states that “In the United Kingdom, analysts from the National Economic Research associates last year said that the deficit will have grown to £7 billion by 2015” All needs simply cannot be met. In other words, demand increases everyday, growing faster than ever, whereas supply does not.  An article by Christopher Hands states that “In June the BMA conference was told, "Rationing has become a necessary evil. We need to formalise rationing to prevent an unregulated, widening, postcode lottery of care. Government no longer has a choice."”

There are two types of rationing healthcare, implicit and explicit. Implicit occurs when the public are not informed of rationing and the reasons behind it, explicit occurs when the public and media are fully aware of rationing and why it has had to occur. There is much argument as to whether all rationing should now be made explicit, this would be fairer because then ALL patients would then be made aware of why they are being refused treatment. There are arguments for implicit rationing such as; it will make the administrative and political processes of healthcare provision run more smoothly, it will make patients and providers happier and it will be inevitable anyway since there are no clear criteria on which to base explicit rationing.

Rationing is obviously very unfair, as people living within a few miles of each other here in the United Kingdom can receive different care for the same illness, depending on their local Primary Care Trust. This is what is now known as the ‘postcode lottery’ – a problem receiving much media attention, causing controversy and political debate and being branded an “unsatisfactory state of affairs.” There are numerous stories all over the country about people being denied treatment they desperately need and should, unquestioningly have the right to. These stories receiving much national media coverage. One in particular being expensive cancer drugs that can prolong life, Sutent is a kidney cancer drug that is available only in some PCT’s. When NICE (National Institute for Health and Clinical Excellence) decides that a particular drug is not cost effective, there is often an outcry and as with Herceptin (breast cancer drug) much campaigning saw a reversal of that decision.

The postcode lottery is something that needs to be accepted at the moment, because it is all we have until something better is available, however unfair it is that the postcode you have can determine the treatment you receive. Going national, rather than local PCT decision will only cause the same problems to arise, with patients then competing against the whole country for treatment they ALL deserve. However, media coverage tends to focus on the clear unfairness of the postcode lottery while paying no attention on how best to allocate limited resources to the endless need of healthcare. Primary Care Trusts have the right to deny treatment on the basis of local needs and expenditure; the downside to this is that some Primary Care Trusts are not as good as others at managing their budgets. There are reports in many newspapers on the differing amounts spent on treatments by different PCT’s.  Consequently, PCT’s face tough decisions about how to allocate limited resources and finance. What are the answers? Well, one answer could be opting for second best treatment.

This leads to many inequalities in the NHS, with the seven forms of rationing coming under fire causing these inequalities. Rationing by dilution is where services are given to all but services are reduced, for example time with general practitioners; lower social classes do not receive as much time with their G.P’s as higher class individuals do. Buchan and Richardson found in a study, that there was “a social class gradient in the length of time general practitioners spent with their patients (upper class patients had longer consultations than others.)” (Cox. 1983. p85) Doctors can make assumptions and give more lengthy explanations to higher social classes whereas lower class people simply do not ask as many questions. In this case, doctors need to become fully aware of what they are doing and make sure that they treat every patient the same. Rationing by delay is when patients have to wait for treatment, e.g. waiting lists, how can waiting lists be done fairly though? They must be devised by a doctor on who has the highest need of treatment. Rationing by deterrence is when patients are put off seeking the treatment they need, e.g. prescription charges. This isn’t fair to the lower classes yet again. People on income support qualify for free eye care etc, but lower classes just over the limit have to pay. This could lead to more costly outcomes if people do not seek the treatment necessary when they first become ill. False health economy! Rationing by denial is another means, patients are denied care for example, controversially, smokers are denied operations until they quit smoking. Most of the seven forms of rationing are unfair to the lower social classes when, ironically these are the individuals that need the most attention. The NHS is set on equal healthcare for all and as a result the Health Divide is not getting smaller.

The QALY (Quality Adjusted Life Years) is a system that attempts to maximise benefits from healthcare spending, it attaches a value to life or quality of life. For example, a hospital is in need of a new set of incubators, on the other hand dialysis machines are also scarce, there are insufficient funds for both – when using QALY the incubators would be chosen because it would give more life years than the dialysis machines. QALY is needed in today’s rationing process as it looks at the good of the population and not the individual.

My recommendations to make rationing fairer would be that doctors, not politicians should be at the forefront of the decision making of rationing, hopefully this will lead to ‘good rationing’ and will be more widely accepted by the public – research has shown that the public is far happier with decisions made by professional medical personnel than those made by bureaucrats. To further ever increasing financial demands on the NHS perhaps funding should be decided on medical urgency/necessity rather than, for example – what some would term unnecessary costing -  on medical procedures such as cosmetic surgery, purely for cosmetic reasons (not for congenital abnormalities e.g. hare lip)

Attempting to clarify the moral principles on which rationing should be based are not doomed to failure. We must have the moral courage to further develop them without secrecy.