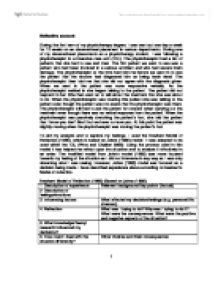 guidelines. Patak et al. (2006) suggested that patient's inability to communicate results in unrecognized pain, feelings of loss of control, depersonalization, anxiety, fear, distress, and frustration. Patients may become anxious when their needs are not met during periods of mechanical ventilation because of their inability to verbally communicate with family and health care providers (Patak et al. 2006). The physiotherapists own experiences may have led her to act the way she did as well, and thinking that the patient was not in a non responsive state may have come from her past experiences and this is why she may have been talking and interacting with the patient as she did which fits in with Patak et al.'s (2006) suggestion. As she stated that she did not think the patient was brain dead she must have thought that this patient was able to understand what she was doing, so this may have made the physiotherapist carry treating how she would a responsive patient. I was also concerned by the patient's lack of verbal response because it meant they were unable to actively give verbal consent and I have begun to realise how important this issue is in the physiotherapy literature (CSP 2002). ...read more.

However, it was difficulty following the steps without them overlapping. For example, when analysing what made me feel like the way I did, I was able to use research to back up my thoughts. Reference: Akrami, S.M, Osati Z, Zahedi F, and Raza M. (2004) Brain Death: Recent Ethical and Religious Considerations in Iran. Transplantation Proceedings, 36, 2883-2887. Booth, L (2005) Observations and reflections of communication in health care-could transactional analysis be used as an effective approach? Journal of Radiography, xx, 1-7 Chartered Society of Physiotherapy (2002) Rules of professional Conduct. London: CSP Dubois, M (2005). Ethical issues at the end of life. Techniques in Regional Anesthesia and Pain Management, 9, 133-138 Johns C (1995) Time to care? Time for reflection. International Journal of Nursing Practice, 1: 37-42 Patak L, Gawlinski A, Fung I, Doering, Berg L J, Henneman E A (2006) Communication boards in critical care: patients' views B Applied Nursing Research 19 (2006) 182-190 Price A M. and Chalker, M (2000). Our journey with clinical supervision in an intensive care unit. Intensive and Critical Care Nursing, 16, 51-55 51 Rocker, GM,Cook, DJ and Shemie, SD (2006) Brief review: Practice variation in end of life care in the ICU: implications for patients with severe brain injury. Canadian Journal of Anesthesia 53:814-819 ?? ?? ?? ?? 1 ...read more.