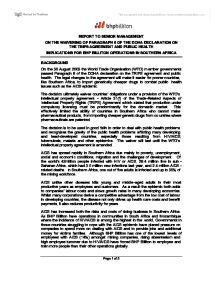 Report to senior management on the waivering of paragraph 6 of the doha declaration on the trips agreement and public health implications for BHP Billiton operations in Southern Africa.

REPORT TO SENIOR MANAGEMENT ON THE WAIVERING OF PARAGRAPH 6 OF THE DOHA DECLARATION ON THE TRIPS AGREEMENT AND PUBLIC HEALTH IMPLICATIONS FOR BHP BILLITON OPERATIONS IN SOUTHERN AFRICA BACKGROUND On the 30 August 2003 the World Trade Organisation (WTO) member governments passed Paragraph 6 of the DOHA declaration on the TRIPS agreement and public health. The legal changes to the agreement will make it easier for poorer countries, like Southern Africa, to import generically cheaper drugs to combat public health issues such as the AIDS epidemic. The decision ultimately waives countries' obligations under a provision of the WTO's intellectual property agreement - Article 31(f) of the Trade-Related Aspects of Intellectual Property Rights (TRIPS) Agreement which stated that production under compulsory licensing must be predominantly for the domestic market. This effectively limited the ability of countries in Southern Africa who cannot make pharmaceutical products, from importing cheaper generic drugs from countries where pharmaceuticals are patented. The decision is to be used in good faith in order to deal with public health problems and recognises the gravity of the public health problems afflicting many developing and least-developed countries, especially those resulting from HIV/AIDS, tuberculosis, malaria and other epidemics. The waiver will last until the WTO's intellectual property agreement is amended. AIDS has spread rapidly in Southern Africa due mainly to poverty, unemployment, social and economic conditions, migration and the challenges of development. ...read more.

the long-term stability and lower costs in providing treatments to HIV/AIDS infected people will assist in stabilising the economy, increase the health of the communities, improve poverty and provide a future for the orphaned children who are already victims of AIDS. IMPLICATIONS Threats If action is not taken in the fight against the AIDS epidemic reports indicate that AIDS could reduce GDP growth rates by 0.5% to 2.6% a year in Southern African countries and this will directly impact on BHP Billiton, reducing turnover of productivity and substantially affecting profit. African Governments could manipulate the provisions of Government distributed mining rights contracts and stipulate that current and potential investors in their countries are responsible for providing indigenous employees, their families and the community with education, health benefits and appropriate treatment for diseases such as AIDS, tuberculosis and malaria. Such actions by the Government will directly impact on costs to current and future investors in Southern Africa. The cost to current and future investors will total $800AUS per worker per year for HIV/AIDS treatments. BHP Billiton currently has 16,627 employees in South Africa and Mozambique, of which 14% are infected with the virus, therefore treatments would total $1.86M per annum for the corporation. Add to this additional cost for the education and support of employee's families, and the community. Governments may also increase taxes on current and future investors in their countries to cover costs for the education and provision and supply of pharmaceuticals for treatments of diseases such as AIDS, tuberculosis and malaria. ...read more.

STRATEGY ACTION PLAN 1. That contact is established with the Governments in South Africa and Mozambique stating BHP Billiton's current strategies in the prevention and treatment of AIDS amongst its employees, and confirming its support of the waiver on the TRIPS agreement. 2. Establish a government relations strategy task force to launch communications with the governments about implementation of policy that improves the physical health of the communities and as a part of the policy, ensure that AIDS medication is available and distributed by the Government to people infected with the disease. 3. Show-case BHP Billiton's current strategies on prevention and treatment of the HIV/AIDS disease to the Government and industries, specifying that have been successful in limiting the impact both on the future of the business and its employees. Strategies include: (i) Limiting the use of migrant workers; (ii) Encouraging private home ownership, therefore reducing the number of workers residing in high-density accommodation; (iii) Delivering a broad educational and awareness program to ensure the workforce is provided with relevant information on HIV/AIDS; (iv) Promoting a healthy lifestyle; (v) Providing free condoms; (vi) Providing a free counselling service at all mining sites; (vii) Provide anonymous testing of employees for HIV; followed by voluntary testing programs. 4. In conjunction with the Governments establish contact with countries willing to import patent pharmaceutical drugs to Africa, and explore the possibility of single supplier at the best price. Chris Alday, RMIT University student Page 1 of 5 ...read more.