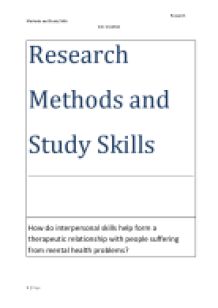 ﻿Research Methods and Study Skills SID: 1113769 Research Methods and Study Skills ________________ How do interpersonal skills help form a therapeutic relationship with people suffering from mental health problems? ________________ Contents Introduction Literature Searching What are Interpersonal Skills and how to they relate with Communication Skills? Peplau?s Theory of Interpersonal Relations Forming a Therapeutic Relationship Conclusion References Appendix A ________________ Introduction In mental health nursing, effective communication and excellent interpersonal skills is the backbone of all aspects of patient care (Bach and Grant, 2010, p9; Dougherty and Lister, 2008, p54). The National Institute of Clinical Excellence (NICE, 2011, p2-4) recognise that communication is a part of clinical excellence, stating that interpersonal skills, the way professions practice and interact with service users about their treatment and care, is essential in shared decision-making and promoting independence. The Department of Health (DoH, 2010, p13) and the Royal College of Nursing (RCN, 2012) agree, stating that shared decision making should be the norm in clinical practice and nurses should put people at the centre of their own care, supporting them to make informed decisions. This idea is also emphasised in the Nursing and Midwifery Council Code (NMC, 2008); that a healthcare professional should acknowledge and respect that people can and will contribute to their own care and wellbeing, with the right support. The NMC (2008, p3) also states that professionals should listen to service users and respond to their concerns and preferences. This implies that communication is a reciprocal process that involves the interchange of both verbal and non-verbal messages to express feelings, information, ideas and knowledge (Dougherty and Lister, 2008, p54). The purpose of this essay is to review and critically analyse the literature and research in regards to my topic. This process has made me think of encounters in practice. In my previous clinical placement I went to an acute admission ward (NMC, 2008, p3).Simpson (2009, p404) ...read more.

Therefore, mobile phones are important in encouraging nurse-client communication and therapeutic relationship (Blake, 2008). Hazelwood (2008) agrees, stating that the use of mobile phone text messaging was a useful communication tool. A nurse and client exchanging in text messaging conversations contributed and encouraged self- expression and self-reflection from clients, which facilitated a more trustworthy therapeutic relationship. According to Hazelwood (2008), alongside therapy and other nursing interventions to care for people suffering with mental health problems, text messaging helps clients open up to new treatment possibilities and can assist with clients? lack of confidence to talk about their issues. Hart (2010) disagrees, however, declaring that ?text messaging is the antithesis of interpersonal relationships? and the purpose of a therapeutic relationship is to interact with one another. According to Hart (2010) text messaging undermines Peplau?s theory of interpersonal relations (1952 cited in Forchuck, 1994) because interpersonal skill requires a two way communication between nurse and client, as well as immediate response of non-verbal an individual communicates. This can only be provided by face-to-face interaction (Hart, 2010). In my opinion, although Hart (2010) provides a reasoned argument of the disadvantages of the use of text messaging, as a nurse you should respect the way an individual chooses to communicate. Coatsworth-Puspoky, Forchuk & Ward-Griffin (2006) conducted a study to collect qualitative data to find out the client?s perspective of the nursing process. This means they used a discovery-orientated approach, to focus on how nurses? social interaction is interpreted, understood and experienced by the service user (Barroso, 2010, p86). Coatsworth-Puspoky, Forchuk & Ward-Griffin (2006) used semi- structured interviews and an ethnographic design to collect data, from both an inpatient and community setting, in more interactive and less controlled way to uncover details about therapeutic relationships. This is one of the advantages of qualitative research during the data collection process; it allows the researcher to rely on insights found whilst, for example, interviewing participants to guide the course of further data collection (Wallace, 2008, p125). ...read more.

This was emphasised by the control imbalance and clear evidence of personal security alarms and keys, creating a distrustful therapeutic relationship. This relates back to Peplau?s theory of interpersonal relations (1952 cited in Forchuck, 1994), stating that a therapeutic relationship is two way and reciprocal (Simpson 1991, p2). In Hem, Heggen and Ruyter?s research (2008) because it was perceived that nurses did not trust the clients; the clients in turn did not trust them. According to Peplau?s theory of interpersonal relations (1952 cited in Forchuck, 1994), trust is a very important factor in the Identification phase because it aids in open and honest communication from both nurse and client. There is an assumption that if this is not achieved the helping relationship cannot progress to the next stage, exploitation, where service users make use of the available resources (Simpson 1991, p11-12). This made me consider whether a distrustful therapeutic relationship can aid recovery. Conclusion To conclude, the purpose of this essay was to review and critically analyse the literature investigating the evidence base behind the use of interpersonal skills to help build a therapeutic relationship with clients suffering with mental health problems. This is important for healthcare professionals the best available evidence to care for service users and to inform decisions for which they are accountable. The current evidence base for interpersonal skills is limited by literature which was published over ten years. This outlines a gap in the evidence base because changes in society and technology could have had an impact on the interpersonal processes and how professionals form therapeutic relationships, which has yet to be researched fully. This has significance for mental health professionals because interpersonal actions are based on sensitively observing patients and as evidence based practitioners these decisions need to be based on research and literature. Specifically the aim of my argument was to support the idea that well-practised communication techniques are ineffective if the idea of the interpersonal connection goes unacknowledged. The research defines what service users? value in a therapeutic relationship and helps healthcare professionals in the understanding of a successful and nurturing nurse-patient relationship. ...read more.