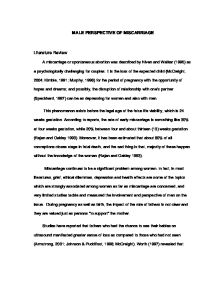 MALE PERSPECTIVE OF MISCARRIAGE Literature Review A miscarriage or spontaneous abortion was described by Niven and Walker (1996) as a psychologically challenging for couples. It is the loss of the expected child (McCreight, 2004; Kimble, 1991; Murphy, 1998) for the period of pregnancy with the opportunity of hopes and dreams; and possibly, the disruption of relationship with one's partner (Speckhard, 1997) can be as depressing for women and also with men. This phenomenon exists before the legal age of the fetus life viability, which is 24 weeks gestation. According to reports, the rate of early miscarriage is something like 30% at four weeks gestation, while 20% between four and about thirteen (13) weeks gestation (Rajan and Oakley 1993). Moreover, it has been estimated that about 80% of all conceptions closes stage in fetal death, and the sad thing is that, majority of these happen without the knowledge of the woman (Rajan and Oakley 1993). Miscarriage continues to be a significant problem among women. In fact, in most literatures, grief, ethical dilemmas, depression and health effects are some of the topics which are strongly associated among women as far as miscarriage are concerned, and very limited studies tackle and measured the involvement and perspective of men on the issue. During pregnancy as well as birth, the impact of the role of fathers is not clear and they are valued just as persons "to support" the mother. Studies have reported that fathers who had the chance to see their babies on ultrasound manifested greater sense of loss as compared to those who had not seen (Armstrong, 2001; Johnson & Puddifoot, 1998; McCreight). Worth (1997) revealed that fathers of stillborn offspring experience a dissatisfying relationship knowing that have not protected their child for the duration of pregnancy and did not have the occasion to nurture him or her (McCreight). So much experiences have already been shared about the mother ' s experience and struggles emotionally in relation to perinatal loss, but too little studies were known about father's experiences and how they are being affected by the perinatal loss of their child? ...read more.

Most fathers whose children passed away due to SIDS appears to have healthier coping skills in a successive pregnancy (Carroll & Shaefer, 1993-1994). With regards to value judgments on perceived differences between the male and female grief which resulted in accepted assumptions regarding difference in bereavement which may not be real (Martin & Doka, 1998). On the other hand, cultural norms may have obstructed men from expressing grief, and they may have responded to a grief measurement tool based on the viewpoint of something they think is culturally proper rather than what they may actually feel ( Samuelsson et al. 2001). Others propose that the full range of men's sorrow reactions were not tapped because nearly everyone measurements focused more on the feminine characteristics of loss such as sadness and tenderness (Staudacher, 1991) speculates that a person who expresses, releases, or entirely works through grief is exclusion rather than the rule. Additionally, little attention has been paid to the association between ontology and masculinity; in fact, believed to have an important bearing on the male occurrence of grief (Thompson, 2001). This supports the call for a clearer understanding about what it is like for fathers to experience pregnancy then after is perinatal loss. The lack of awareness to the emotional dimensions of care is also seen in the medical management of miscarriage. Time and again, the woman is admitted to hospital to undergo some surgical procedure of dilatation and also curettage in order to remove any residual products of conception (Hull et al 1997). Except there are complications noted, the woman is discharged back home after a couple of hours. Consequently, the care given concentration on the physical management of the woman and also implies that this is all what is required. Little if any thought seems to be certain to her emotional wellbeing. The short hospitalisation as well as discharge may in fact consider as a major contributing factor to this perceptible lack of concern. ...read more.