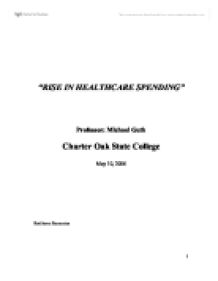 "RISE IN HEALTHCARE SPENDING" Professor: Michael Guth Charter Oak State College May 10, 2006 Healthcare Economics Rise in Healthcare spending Reforms for slowing the growth in health care spending and increasing the value of care have largely focused on insurance-based solutions. Consumer-driven health care represents the most recent example of this approach. However, much of the growth in health care spending over the past twenty years is linked to adaptable population risk factors such as obesity and stress. Rising disease occurrence and new medical treatments account for nearly two-thirds of the rise in spending. To be effective, reforms should focus on health promotion, public health interventions, and the cost-effective use of medical care. This paper summarizes the factors responsible for the rise in health care spending during the past twenty years. As the data show, most of this rise has been driven by a rise in treated disease occurrence, fueled by an increase in population risk factors such as obesity and by innovations in the treatment of chronic disease. The bulk of the paper then outlines a series of reforms that are designed to address the factors responsible for the rise in spending. Over the past few years, the cost of health insurance has risen 54 %. This persistent rise has recently been attributed to the low out-of-pocket costs paid by consumers. By not knowing the full costs associated with health care, consumers demand more and "overuse" it. The growth in spending has also been linked to the rising use of prescription drugs and new medical innovations and treatments. ...read more.

The psychology literature has outlined the process by which people change their behavior. This research has identified distinct stages that accompany behavior changes such as smoking, drinking, exercise, and diet. Lessons from this line of research will be important to include in the design of population-based behavior change programs. Another key design issue is to how to get people to participate in behavior change programs and sustain their participation. Unfortunately, there have been few successful interventions used in health care to reduce weight, modify diets, and lower stress. Some employers have adopted worksite health promotion programs, although these vary greatly in terms of design, intensity of the intervention, rates of participation, and results. Yet, well-designed programs do show promise. A recent review of the literature found an average savings of $3.93 for each dollar invested in a health promotion program. The literature also reveals substantial variation in the design, comprehensiveness, and effectiveness of the limited number of programs now in existence. A key policy challenge is to identify empirically the key design features of effective programs and provide strong incentives for employers to adopt them and for workers to participate. There are three new initiatives that could prove helpful in slowing the growth in future health care spending. They are federal financial incentives for workplace health promotion programs, school-based interventions, and Clinical effectiveness and technology assessment. 1) Federal financial incentives for workplace health promotion programs. Only about 30% of employers have any health promotion programs, and only about 10% of these can be viewed as comprehensive. ...read more.

context. To be effective, membership should include representation from both public- and private-sector interests. A start of this process is outlined in the Medicare Prescription Drug, Improvement, and Modernization Act (MMA) of 2003. Section 1013 of the law charges the secretary of health and human services with examining scientific evidence concerning the comparative clinical effectiveness, outcomes, and appropriateness of care. Building on the MMA mandate, the technology appraisal process for new drugs and devices could move in parallel with the FDA process for determination of safety and effectiveness. For existing drugs and procedures (such as those listed above in the NICE process), the U.S. version could examine practice are as with the largest variation in medical spending and most costly medical conditions. For instance, examining the top fifteen or twenty medical conditions would account for nearly two-thirds of all U.S. medical spending. In conclusion, options for reforming health care need to include both population-based/public health approaches and economic incentives for the cost-conscious use of services. Much of the current debate over health care spending has focused on demand-side innovations, such as consumer-driven health care, that target overuse of health care by consumers. However, most of the rise in health care spending is traced to the rise in population risk factors and the application of new technologies to treat chronically ill patients. Even if widely adopted, these demand-side fixes would do little to reduce the rise in obesity happening and other key risk factors. Maintaining or reducing the population amount of disease represents a strategy with large potential pay offs, without the side effects of rationing and other interventions such as managed care that have proved politically unpopular. ...read more.