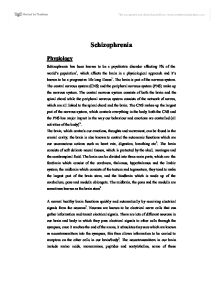 Schizophrenia Physiology Schizophrenia has been known to be a psychiatric disorder affecting 1% of the world's population1, which affects the brain in a physiological approach and it's known to be a progressive life-long illness1. The brain is part of the nervous system. The central nervous system (CNS) and the peripheral nervous system (PNS) make up the nervous system. The central nervous system consists of both the brain and the spinal chord while the peripheral nervous system consists of the network of nerves, which are all linked to the spinal chord and the brain. The CNS makes up the largest part of the nervous system, which controls everything in the body, both the CNS and the PNS has major impact in the way our behaviour and emotions are controlled (all activities of the body)2. The brain, which controls our emotions, thoughts and movement, can be found in the cranial cavity, the brain is also known to control the autonomic functions which are our unconscious actions such as heart rate, digestion, breathing etc2. The brain consists of soft delicate neural tissues, which is protected by the skull, meninges and the cerebrospinal fluid. The brain can be divided into three main parts, which are: the forebrain which consist of the cerebrum, thalamus, hypothalamus and the limbic system, the midbrain which consists of the tectum and tegmentum, they tend to make the largest part of the brain stem, and the hindbrain which is made up of the cerebellum, pons and medulla oblongata. The midbrain, the pons and the medulla are sometimes known as the brain stem2 A normal healthy brain functions quickly and automatically by receiving electrical signals from the neurons3. Neurons are known to be electrical nerve cells that can gather information and transit electrical signals. There are lots of different neurons in our brain and body in which they pass electrical signals to other cells through the synapses, once it reaches the end of the axons, it stimulates tiny sacs which are known as neurotransmitters into the synapses, this then allows information to be carried to receptors on the other cells in our brain/body2. ...read more.

and histaminergic (H1) receptors32. It's an antagonist for both the D2 dopamine receptor and the 5HT2A serotonin receptor, which significantly works well by reducing the suicidal, violence and aggressive part of a schizophrenic patient; it also works well by reducing both the positive and negative symptoms of schizophrenia. Clozapine is also known to be more effective in the limbic than the striatum dopamine receptor. Clozapine has been proven to be well tolerated in the long-term use as it has a good patient compliance; hospitalisation rate for patients tends to be much lower, adverse side effects were reduced compared to Haloperidol, which shows less patient compliance and more side effects, although both drugs proved to have therapeutic efficacy in successfully preventing relapse32. Due to the major side effect observed by Clozapine, agranulocytosis, it can only be used as a first line treatment when other antipsychotic medication has proved insufficient33. Amisulpride is another type of atypical antipsychotic drug, which is also used in reducing more of the negative symptoms of schizophrenia. Amisulpride is known to be selective for dopamine receptors having a high affinity for D2 and D3 dopamine receptors and not so well with serotonin receptors, the dose effect of Amisulpride is very important as if given at a higher dose, it blocks the postsynaptic dopamine D2 receptor in the limbic system which leads to reduced dopamine transmission but at a lower dose, it blocks the presynaptic D2 autoreceptors that is involved in the release and synthesis of dopamine which can effectively lead to reduced negative symptoms. It is also used in first episode patients with schizophrenia. The common side effect of this drug includes weight gain and hyperprolactinemia34. Olanzapine is another type of atypical antipsychotic which is known to be a better treatment for negative symptoms compared to typical neuroleptics but for the positive symptoms, treatments are equivalent with typical antipsychotics. It tends to have high affinity for 5HT2 serotonin receptors than dopamine D2 receptors, it is also known to be an antagonist for other serotonin and dopamine subtypes also for muscarinic, histaminergic and adrenergic receptors35. ...read more.