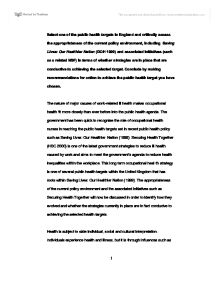 Select one of the public health targets in England and critically assess the appropriateness of the current policy environment.

Select one of the public health targets in England and critically assess the appropriateness of the current policy environment, including Saving Lives: Our Healthier Nation (DOH 1999) and associated initiatives (such as a related NSF) in terms of whether strategies are in place that are conductive to achieving the selected target. Conclude by making recommendations for action to achieve the public health target you have chosen. The nature of major causes of work-related ill health makes occupational health fit more closely than ever before into the public health agenda. The government has been quick to recognise the role of occupational health nurses in reaching the public health targets set in recent public health policy such as Saving Lives: Our Healthier Nation (1999). Securing Health Together (HSC 2000) is one of the latest government strategies to reduce ill health caused by work and aims to meet the government's agenda to reduce health inequalities within the workplace. This long term occupational health strategy is one of several public health targets within the United Kingdom that has roots within Saving Lives: Our Healthier Nation (1999). The appropriateness of the current policy environment and the associated initiatives such as Securing Health Together will now be discussed in order to identify how they evolved and whether the strategies currently in place are in fact conducive to achieving the selected health targets. Health is subject to wide individual, social and cultural interpretation. Individuals experience health and illness, but it is through influences such as culture, class and gender that the experiences are shaped. Images of health are also built on media messages and prevalent ideas about health rights, levels of service, access, awareness and so on. These images of health also include social expectations about what it means to be healthy in a particular society. The nature of health is that the different aspects are inter-related. There is a general consensus that health is multidimensional and that the holistic view of health currently prevails (Aggleton and Homans 1987; Ewles and Simnett 1992) ...read more.

On forming a new government New Labour set public health policies in line with its health agenda. Out of this rose a new white paper Saving Lives: Our Healthier Nation, which sets ambitious targets for life expectancy to be increased, and inequalities in health to be reduced. The Labour Government plan to achieve this through it's public health policy in a "third way" (Connelly 1999). Labour's policies in line with the WHO are aimed at strengthening communities, and encouraging individuals to seize opportunities and take responsibility for their action. The election of the first labour government for over 18 years, thus bought about significant changes in the public health policy arena. Policy makers were once again discussing how to tackle the health inequalities rather than health variations as discussed in The Health of the Nation, and were looking to tackle the structural as well as lifestyle factors that contribute to health and illness (Pavis 1998). Saving Lives: Our Healthier Nation (DOH 1999) was once again a policy based on the medical model with disease led targets and the absence of disease being the goal. The policy was using a traditional approach in that it was expert led in order to achieve change and is open to the structuralist critique in that change and the promotion of health is promoted from the top down in order to achieve normalisation of behaviour. The needs identified within the Saving Lives policy are normative with the use of some comparative needs where comparisons are made with the European Union in order to justify the policy and targets. Saving Lives: Our Healthier Nation (DOH 1999) acknowledges that the workplace can provide opportunities to improve the health of the workforce and to address health inequalities, thus drawing on the multi-sectoral approach advocated by the WHO. The Blair Government policies have shown a commitment to communitarian ideals by combining individual rights with responsibilities and invoking state authority where necessary to uphold the common good (Baggott 2000). ...read more.

The Securing Health Together Strategy is once again a medical model with the absence of disease being the focus and targets of a 20% reduction in the incidence of work related ill health and a 30% reduction in the number of work days lost due to work related ill health by 2010. The strategy can lead itself to a structural critique with a top down, professional led approach to change behaviour, with the need for the strategy being identified through epidemiological data which is compared with other EU countries and normative need identified through statutory legislation and surveillance. The new government document, Taking a Public Health Approach in the Workplace (DOH 2003) once again reinforces the role of occupational health and workplaces in health promotion. This collaborative approach continues to be fostered with this Department of Health document reinforcing the Health and Safety Commission's strategy Securing Health Together (2000), The National Health Service Frameworks and all linking with the original targets to be met by 2010 in Saving Lives: Our Healthier Nation. Overall it would appear from the preceding analysis that the current policy environment has elements that are conducive to reducing mental health and stress within the UK and constraints especially where work related stress is involved. As previously discussed the nature of the major causes of work related ill health makes occupational health fit more closely to the public health agenda than ever before. Despite this, more effective prevention, especially in the arena of work related mental ill health and stress will probably not be achieved without changes in employment law. Recommendations would be to take the radical structuralist approach with regards workplace stress and for the Health and Safety Executive to enforce its stress at work guidance by making it an Approved Code of Practice. This would require all employers to adhere to the stress guidelines which would be enforceable through criminal court rather than the voluntary stance that is currently in place and obviously not working as the number of companies taken to court by their employees due to work related stress continues to soar. ...read more.