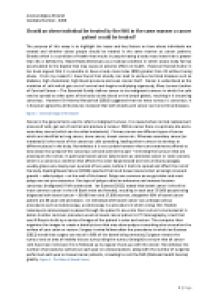 Should an obese individual be treated by the NHS in the same manner a cancer patient would be treated?

﻿Jessica Adigwe-Obiorah Candiate Number - 6200 Should an obese individual be treated by the NHS in the same manner a cancer patient would be treated? The purpose of this essay is to highlight the issues and key factors on how obese individuals are treated and whether obese people should be treated in the same manner as cancer patients. Obesity which is a condition of health that results in people having a body mass index that is greater than 30; is defined by Black Media Dictionary as a medical condition in which excess body fat has accumulated to the degree that may cause an adverse effect on health. However Hannah Sutter in her book argued that it is possible to have a body mass index (BMI) greater than 30 without being obese. From my research I have found that obesity can lead to various terminal diseases such as diabetes, high cholesterol, high blood pressure and even cancer itself. Cancer is understood as the mutation of cells which gets out of control and begins multiplying vigorously; Mary Lunnen (author of Cervical Cancer ? The Essential Guide) defines cancer to be malignant tumours in which the cells tend to spread to other parts of the body via the blood or the lymph glands, resulting in it becoming cancerous. However Dr Harvey Marcovitch (2010) suggested that not every tumour is cancerous. It is however agreed by all literatures reviewed that both obesity and cancer can be terminal diseases. Figure 1 - External Image of the Bowel Cancer is the general term used to refer to malignant tumour, it is caused when normal replacement process of cells, get out of control and produce a tumour. Within cancer there is a primary site and a secondary cancer (which can be called metastasis). Primary cancer are different types of cancer which are identified as lung cancer, bone cancer, breast cancer etc. ...read more.

Overall there has been an average increase in obesity of 65%, over the past 12 to 13 years. (WHO, 2012) defines obesity and overweight parallel to Black Media Dictionary; with overweight being a BMI greater than 25 and obesity being a BMI greater than 30. Obesity can increase the likelihood of various diseases such as heart disease, type 2 diabetes; at its worse can lead to amputation, blindness, heart attack and death. Obesity could even lead to certain forms of cancer (malignant neoplasm). According to the HSE (Health Survey of England, 2011) data by 2012 a staggering one in three people will be obese in the UK. Currently based on the WHO (2012) data globally there is more than one billion overweight individuals. As you are aware, our current economy state is in a recession therefore the government is lead to make spending cuts; reported by Channel 4 News (2011) more than 50,00 NHS jobs will be lost over the next five years. Last year the Prime Minister (David Cameron, 2011) delivered a speech that outlined the Government’s continued commitment to the reform of the NHS, emphasising out some of the reason he believed justified the reforms. High and growing levels of obesity in the UK, associated health costs, was one of the reasons he highlighted. With the NHS facing growing costs from treating patients with obesity linked conditions, David Cameron (2011) quoted ‘Take obesity; it already costs our NHS a staggering £4 billion a year. But within four years, that figure is expected to rise to £6.3 billion.’ The increase in obesity highlights the causes; Cancer Research UK (2009) stated that the cause of obesity is simply the result of taking in more calories through your diet that you are burning through physical activity. The reason for this calorie imbalance vary from person to person, it can be caused by a combination of environment, genes and behaviour. ...read more.

that advertises junk food such as fatty fries and greasy burgers, the demand for fast food will go down, resulting in a decrease in obesity. Additionally from my studies obesity is not only due to excess eating but can be due to psychological reasons. The psychological factors can influence eating habits. Many people eat in response to negative emotions such as boredom, sadness, anger. People who have difficulty with weight management may be facing emotional and psychological issues. According to WebMD (2005) about 30% of people who seek treatment for serious weight problems have difficulties with binge eating. During a binge-eating episode, people eat large amounts of food while feeling they can?t control how much they are eating. An emotional and psychological factor in child obesity could be due to the child is being neglected by their parents, undergoing series of bullying or even trying to cope through their parents divorcing. In adult obesity it could be a bad break-up, a loss of a family friend or relative, stress from work etc. These are all factors that I believe highlights obesity to not be all self-indulgence. Furthermore from my research which goes as far as the 1980s and 90s experts have found that insulin (as mentioned earlier) along with IGF (insulin-like growth factors) also plays a part in the lives of obese patients. While insulin levels may fluctuate, IGF changes more slowly. Moreover constant highs and lows in insulin levels can lead to cause an increased level of IGF, which unlike insulin effectively stays at a high level. Also I am aware that it is reasonably to claim that obese patients are costing the government greatly for no reason, when they could easily exercise; yet when you exercise your muscle tissues ? which is working hard ? will draw on fat supplies to provide energy, nonetheless the person would gain weight than they already have before losing the weight. Overall I believe the stereotypes of obese patients are what causes people to become narrow minded and view obesity as a selfish act on NHS rather than a medical condition which can become terminal. ...read more.