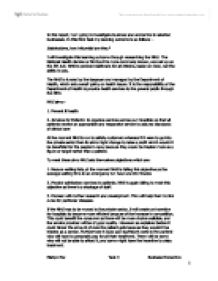 Stakeholders, how influential are they?

In this report, I am going to investigate business and economics in selected businesses. In this third task my learning outcome is as follows - Stakeholders, how influential are they? I will investigate this learning outcome through researching the NHS. The National Health Service or NHS as it is more commonly known, was set up on the 5th July 1948 to provide healthcare for all citizens, based on need, not the ability to pay. The NHS is funded by the taxpayer and managed by the Department of Health, which sets overall policy on health issues. It is the responsibility of the Department of Health to provide health services to the general public through the NHS. NHS aims:- 1. Prevent ill health 2. Services for Patients: to organise services across our Hospitals so that all patients receive an appropriate and responsive service to assured standards of clinical care At the moment NHS is run to satisfy customers whereas if it were to go into the private sector then its aims might change to raise a profit which wouldn't be beneficial for the people in care, because they would be treated more as a figure or target rather than a patient. To meet these aims NHS sets themselves objectives which are: 1. Reduce waiting lists, at the moment NHS is failing this objective as the average waiting time in an emergency is 1 hour and 20 minutes 2. ...read more.

For example if a huge super hospital were to open in a low employment rate area then it would have positive effects on the employment as their will be numerous posts available. Suppliers The suppliers supply the hospitals with all of the necessary equipment such as heart monitors, defibrillators etc. without them then hospitals would struggle to run effectively. Suppliers will be interested in the NHS because they are the source of income for them, without that contract then it could lose the suppliers a lot of potential money. For example if the way that the NHS was run changed then the new owners may decide to change suppliers. Private healthcare i.e. bupa Private healthcare is growing rapidly throughout the UK. More and more people are paying to go private with companies such as BUPA who promised to cut waiting lists and offer better treatment. At the moment the NHS are making numerous redundancies and therefore these private healthcare businesses will be interested in 'poaching' these recently redundant staff to work private for them. This also extends to sometime these private hospitals tempting existing NHS doctors to go private in return for a higher wage. Another interest that private health care has in the NHS is waiting times and lists. If they are long then they can use this as a feature as to why people should go private and pay for care rather than wait for the NHS. ...read more.

They can all affect the way that the NHS is run by changing the way that they act and way that they think. For example if employees i.e. doctors, nurses and ancillary staff were all persuaded to work for private health care companies for a higher wage then the NHS would be left with an employee shortfall that would leave them unable to effectively treat patients. This in turn would cause the government (which in my opinion is the most influential stakeholder because they are the people that set up the NHS and have the biggest say in how it is run) to stop and think that they must be doing something wrong for all of these employees to leave. Furthermore, if this crisis of doctors and nurses leaving results in deaths because of there not being enough people to treat patients, then it could cause bad publicity towards the NHS because people are dying because of the problems being caused. To sum up, I think the most influential stakeholders are the doctors and nurses and the government, because they are the people that cause the greatest problems if they were to change the way they act. Having said this I also believe that the nurses as a stakeholder are the most vulnerable because at the moment the NHS cannot afford to pay every nurse and are therefore making redundancies, thus causing unhappy stakeholders in both the nurses and the general public who may receive inferior treatment because of these cutbacks. ?? ?? ?? ?? 1 Martyn Fox Task 3 Business Economics ...read more.