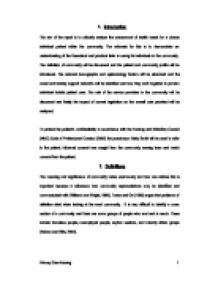 The aim of the report is to critically analyse the assessment of health needs for a chosen individual patient within the community. The rationale for this is to demonstrate an understanding of the theoretical and practical links in caring for individuals

1. Introduction The aim of the report is to critically analyse the assessment of health needs for a chosen individual patient within the community. The rationale for this is to demonstrate an understanding of the theoretical and practical links in caring for individuals in the community. The definition of community will be discussed and the patient and community profile will be introduced. The relevant demographic and epidemiology factors will be examined and the social and kinship support networks will be identified and how they work together to provide individual holistic patient care. The role of the service providers in the community will be discussed and finally the impact of current legislation on the overall care provided will be analysed. To protect the patient's confidentiality in accordance with the Nursing and Midwifery Council (NMC) Code of Professional Conduct (2002) the pseudonym Betty Smith will be used to refer to the patient. Informed consent was sought from the community nursing team and verbal consent from the patient. 2. Definitions The meaning and significance of community varies enormously and how one defines this is important because it influences how community representatives may be identified and communicated with (Williams and Wright, 1998). Turton and Orr (1993) argue that problems of definition exist when looking at the word community. It is very difficult to identify a cross section of a community and there are some groups of people who are hard to reach. These include homeless people, unemployed people, asylum seekers, and minority ethnic groups (Naidoo and Wills, 2000). Ewles and Simnett (1992) suggest that community can be defined as a network of people. The link between them may be a housing estate or an area in which they live. It might even be the work they do, their ethnic background or there may be some other common factor. Naidoo and Wills (2000) support this view and add that any geographical community will include people whose primary identity is based on different factors such as class, race, gender or sexual orientation and therefore people may belong to several different communities. ...read more.

The main causes of mortality between the years 2001-2002 among men and women aged 75 and under in Evington and its surrounding areas are presented in figure 6. Even though Coronary Heart Disease (CHD) and Cancer are national targets of health, it can be observed that Evington and its surrounding areas have a problem with this. The predominant causes are malignant neoplasm's (24% in male and 34% in female) and circulatory diseases (40% in men and 30% in female). Figure 6 Public Health Profile (2004) The practice profile (2004) identifies that the overall population of Evington with Type 1 and 2 diabetes (see Appendix 5) is 4.3%, which is higher than the national average of 3% (DOH, 2002). The prevalence of diabetes rises with age (figure 7) and the high percentage of elderly patients could account for this. Evington also has a high population of Asians and Davies et al (1996) suggests that Type 2 diabetes is particularly high in this ethnic group. Figure 7 Practice Profile (2004) 4.3 Community Facilities Evington provides the immediate environment for where people live, work and play and for many more vulnerable groups, such as the older people and those on low income, most of their lives are lived solely in this area. Essential local services are provided such as post offices, shops, regular buses and health centres. There are a number of voluntary, statutory and social services available in the area (Appendix 6) that Betty is aware of. 5. Needs Assessment Distinguishing between individual needs and the wider needs of the community is important in the planning and provision of local health services. If these needs are ignored then there is a danger of a top-down approach to providing health services, which relies too heavily on what few people perceive to be the needs of the population rather than what these needs are (Twinn et al, 1996). ...read more.

and consolidate the Green Paper (1997). GP fund holding was abolished and PCG's became Primary Care Trusts (PCT). The PCT's were the local unit of management, participation and emphasis that were introduced in April 2000. The NHS plan (2000) was a modernisation strategy where 19 billion pounds has been invested for a ten-year plan 2000-2010. It introduced the National Service Frameworks (NSF), which set national standards and identify key interventions for a defined service or care group, put in place strategies to support implementation and establish ways to ensure progress within an agreed time scale. The plan was developed to shift the balance of power from 'top down' to 'bottom up' and involve patient participation. Health Action Zones (HAZ) were also introduced to pull together people and the private sectors. The impact of the policy related directly to patient care is all patients including Betty are entitled to a basic package of care by being a member of a PCT. Betty benefits from an enhanced package of care, as the NSF for older people (2001) and NSF for diabetes (1999) is available. However patients with Multiple Sclerosis on the DN's caseload in Evington are not benefiting, as a NSF has not yet been produced. Local community facilities such as a library, adult evening classes and voluntary services such as Age Concern are also used by Betty and are highlighted in Appendix 5. 7. Conclusion By conducting a thorough assessment and involving patient participation a satisfactory package of care is available to meet Betty's health needs. She is fully aware of all the services that are available to her and is capable of making a choice for the ones she is using and others that she did not use at the time of assessment. From this report it can be identified that assessing the health needs of Betty can be beneficial to her and her community and becoming a member of a PCT entitles her to a free basic package of care with additional NSF for diabetes and a NSF for obesity, which is currently underway. 8. ...read more.