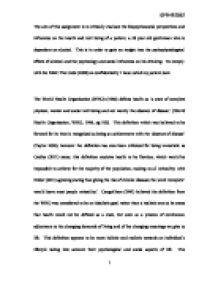 The aim of this assignment is to critically evaluate the biopsychosocial perspectives and influences on the health and well being of a patient, a 38 year old gentleman who is dependent on alcohol.

The aim of this assignment is to critically evaluate the biopsychosocial perspectives and influences on the health and well being of a patient, a 38 year old gentleman who is dependent on alcohol. This is in order to gain an insight into the pathophysiological effects of alcohol and the psychology and social influences on his drinking. To comply with the NMC The Code (2008) on confidentiality I have called my patient Jack. The World Health Organisation (WHO) (1948) defines health as 'a state of complete physical, mental and social well-being and not merely the absence of disease', (World Health Organisation, WHO, 1946, pg 100). This definition which was believed to be forward for its time is recognised as being an achievement with the 'absence of disease' (Taylor 2006), however the definition has also been criticised for being unrealistic as Godlee (2011) states, this definition explains health to be flawless, which would be impossible to achieve for the majority of the population, making us all unhealthy with Huber (2011) agreeing stating that giving the rise of chronic diseases the word 'complete' would leave most people unhealthy'. Canguilhem (1991) believed the definition from the WHO was considered to be an idealistic goal rather than a realistic one as he states that health could not be defined as a state, but seen as a process of continuous adjustment to the changing demands of living and of the changing meanings we give to life. This definition appears to be more holistic and realistic towards an individual's lifestyle taking into account their psychological and social aspects of life. The Department of Health, (DoH, 2007, pg 41) defined health as "a subjective state of being healthy, happy, contended, comfortable and satisfied with one's quality of life." These definitions are more holistic to an individual and appear to support the biopsychosocial model, whereas The WHO, (1946), definition appears to use the biomedical model as a framework as it defined health as the 'absence of disease' which has a less holistic approach but this could be because the biopsychosocial model had not been developed until 1977. ...read more.

Jack started drinking at the age of 15 when his mother died in a car crash, his relationship with his father broke down as soon as he started drinking and was often referred to as a failure. NICE 2011 guidelines on alcohol dependence and alcohol abuse state that adverse life events can trigger excessive drinking and may predispose to the development of alcohol dependence, this is particularly apparent following a bereavement or job loss. Thompson et al (2008) suggested that there are two distinct types of alcoholism. Type 1 alcoholism affects both men and women and requires the presence of a genetic as well as an environmental predisposition and can start later on in life and can take on either a mild or severe form. Type II alcoholism, affects mainly sons of male alcoholics, is influenced only weakly by environmental factors, often begins during adolescence or early adulthood, is characterized by moderate severity, and usually is associated with criminal behaviour and that additional studies have demonstrated that type I and type II alcoholics also differ in characteristic personality traits (e.g., harm avoidance and novelty seeking respectively. Jack's drinking would correspond with Type 1 alcoholism as he mainly drank as a coping mechanism, although started at an early age but am unsure of any genetic connection with alcoholism and would not like to assume otherwise. Khantzian (1997) states that individuals become addicted as the result of their attempts to adapt their heightened reactions to stress and alleviate their feelings, while attempting to block out negative emotions or use avoidance as their sole coping strategies. Folkman and Lazarus have defined coping as 'the person's cognitive and behavioural efforts to manage the internal and external demands of the person-environment transaction that is appraised as taxing or exceeding the resources of the person' (Folkman et al., 1986), this could mean that the stressfulness of a situation is dependent on the person and how they cope with the environment and resources around them. ...read more.