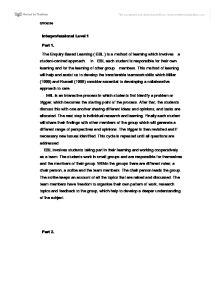 Interprofessional Level 1 Part 1. The Enquiry Based Learning ( EBL ) is a method of learning which involves a student-centred approach. In EBL each student is responsible for their own learning and for the learning of other group members. This method of learning will help and assist us to develop the transferable teamwork skills which Miller (1999) and Russell (1999) consider essential to developing a collaborative approach to care. EBL is an interactive process in which students first identify a problem or trigger, which becomes the starting point of the process. After that, the students discuss this with one another sharing different ideas and opinions, and tasks are allocated. The next step is individual research and learning. Finally each student will share their findings with other members of the group which will generate a different range of perspectives and opinions. The trigger is then revisited and if necessary new issues identified. This cycle is repeated until all questions are addressed. EBL involves students taking part in their learning and working cooperatively as a team. The students work in small groups and are responsible for themselves and the members of their group. Within the groups there are different roles; a chair person, a scribe and the team members. The chair person leads the group. The scribe keeps an account of all the topics that are raised and discussed. The team members have freedom to organise their own pattern of work, research topics and feedback to the group, which help to develop a deeper understanding of the subject. Part 2. At the beginning of the session, in small groups, we worked through the set triggers. ...read more.

In health and social care, there was an early recognition that the boundary between these two public services was a key issue for service users and for the notion of user centred practice that the government wanted to achieve (Glasby, 2003). It was with the publication of it's White Paper on the NHS (department of Health, 1997), that the government announced its intention to bring down what it described as the "Berlin Wall" that had grown up between heath and social services (House of Commons Debates, 1997). Following this, the government introduced a number of policy initiatives to promote effective partnerships between health and social care. The first one, The Parnership in Action (1998) proposed new legislation to remove existing barriers to joint working and facilitated inter-agency collaboration but this proposals however did not tackle the root cause of the problem. The second one, The Royal Commission on Long Term Care (1999) focused on the shortcomings of the current system for organizing and funding long-term care, the inequitable distinction between health care (free) and means-tested social care, but the Commission's failed to resolve the inconsistency inherent in the current system. Finally the third one was The NHS Plan (Department of Health, 2000a), which was intended to be a long-term strategy to re-built the NHS , where the government, among other things, promised financial incentives for joint working but it also threatened decisive action against the ones who failed to work collaboratively. According to Gasby ( 2003) creating halfway houses somewhere in between was not an answer to the longstanding issues that the social care divide raises, and would only postpone the inevitable. ...read more.