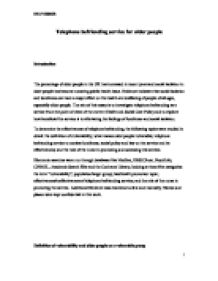 The aim of this essay is to investigate telephone befriending as a service from the point of view of the current Health and Social Care Policy and to explore how beneficial the service is in alleviating the feelings of loneliness and social isolation.

Telephone befriending service for older people Introduction The percentage of older people in the UK has increased in recent years and social isolation in older people has become a soaring public health issue. Evidence indicates that social isolation and loneliness can have a major effect on the health and wellbeing of people of all ages, especially older people. The aim of this essay is to investigate telephone befriending as a service from the point of view of the current Health and Social Care Policy and to explore how beneficial the service is in alleviating the feelings of loneliness and social isolation. To determine the effectiveness of telephone befriending, the following topics were studied in detail: the definition of vulnerability; what makes older people vulnerable; telephone befriending service to combat loneliness; social policy and law on the service and its effectiveness; and the role of the nurse in promoting and accessing this service. Electronic searches were run through databases like Medline, EBSCOhost, PsychInfo, CINAHL, Academic Search Elite and the Cochrane Library, looking at these five categories: the term "vulnerability"; population/target group; law/health promotion topic; effectiveness/ineffectiveness of telephone befriending service; and the role of the nurse in promoting the service. Additional literature was examined online and manually. Names and places were kept confidential in this work. Definition of vulnerability and older people as a vulnerable group The term "vulnerable" is often used to describe people or groups that are poor, disadvantaged, dependent, frail and/or isolated (Delor and Hubert, 2000). National policy on adult protection defines a vulnerable adult as a "person who is, or may be, in need of community care by reason of mental or other disability, age or illness; and who is or may be unable to take care of him or herself, or unable to protect him or herself against significant harm or exploitation" (Department of Health, 2000). Research suggests that vulnerability comprises two distinct concepts: one of which is etic vulnerability, linked to externally evaluated risk, determined by an outsider and ...read more.

In addition, the transferability of the intervention was debatable as it was relatively labour intensive with, on average, three calls per client each week. There is little evidence in the research literature of the acceptability and appropriateness of telephone befriending services for older people in terms of their mental and physical health and quality of life and which takes into account the diversity of older people in relation to age, ethnicity, gender, social class and geography. In light of this apparent gap in research, a systematic review was undertaken, which concluded that educational and social activity group interventions that target specific groups could alleviate social isolation and loneliness among older people, but the effectiveness of home visiting and befriending remained unclear (Cattan et al, 2005). In a later study conducted by Cattan et al (2008) results suggest that telephone befriending has a significant impact on older people's lives. During the interviews the participants stated that they could not imagine life without it. They considered their relationship with the befriender to be crucial to their quality of life and the maintenance of their physical and psychological health. A measure of how much the interviewees valued the telephone befriending service and felt a part of it was the fact that they wanted more calls and said they would welcome the opportunity to train as a volunteer so they could make telephone calls. Age UK's Call in Time telephone befriending service has been proven to be of a great help to many of its service users. Mrs. B.'s experience gives an example of how the service works: "My husband passed away 4 years ago. On the same day my daughter was diagnosed with cancer, so I was immediately caring for her. That lasted 3 years, then it went to her kidneys, and she passed away in a hospice. I think the worst thing was the loneliness. I was very, very, very lonely, and very, very, very sad" (Age UK, 2012). ...read more.